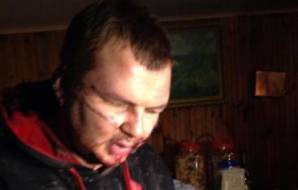 AutoMaidan leader Dmytro Bulatov, who had not been seen since Jan 22, was found alive on Thursday evening in the village of Vyshenki outside Kyiv, covered in blood, with part of his ear cut off, and with multiple injuries.  .  He is presently in hospital and has told journalists that over his 8 days in captivity, he was beaten and tortured by his abductors, who tried to crucify him, with his hands still bearing the marks..

Bulatov doesn’t know who his abductors were, but says that they spoke with Russian accents.  They thankfully’did not kill him but took him to the Boryspil district, near Kyiv and threw him out of their car.  Badly beaten, he walked through the village, hammering on doors until finally a local resident let him in.  From there he was able to phone friends who came and got him.  He is now receiving treatment at the Borys private clinic.

There were very gravel fears for Bulatov’s safety after he disappeared on the same evening that the police, yet again in close cooperation with titushki or hired thugs had carried out an effective ambush on other members of the AutoMaidan movement.

At around 4 a.m. on Jan 22, Berkut officers, probably together with titushki, detained AutoMaidan activists who were patrolling Clinic No. 17.  They smashed up the cars and detained all those in the cars.  According to one young man who managed to escape, they threatened to take them away and beat them.

The activists were later found in different Kyiv police stations.

Singer Ruslana issued an open letter regarding the events in which she writes that the activists reported an unprecedented level of aggression from the Berkut officers.  She said that they believe that the officers involved may have been from Russia.

It soon became clear that Bulatov was missing.  The AutoMaidan leader had been the object of unhealthy interest from the police, doubtless, threats, and had therefore been in hiding, however had always kept in phone contact.  By Jan 30, nothing had been heard from him for over a week.

On Jan 28 Bulatov’s lawyer Dmytro Yovdiy stated publically that he had approached the Security Service [SBU] since a week after the activist’s disappearance, the police had still taken no real action.  Although Bulatov’s phone had been turned on for quite some time after he disappeared, the police had not even obtained a list of telephone calls from the mobile operator.

Concern was high particularly after the killing of Yury Verbytsky whose badly beaten body was found in the Boryspil forest two days after he was abducted from hospital together with prominent journalist and EuroMaidan activist Ihor Lutsenko.

Lutsenko’s abduction received considerable media attention as well as response from foreign embassies in Ukraine.  He himself is convinced that this was what saved him from the same fate as Yury Verbystsky.

The same may be true of Dmytro Bulatov whose disappearance was very widely reported and led to an Amnesty International urgent action.

This is crucial to understand since there are around 30 people who have disappeared in circumstances which give grounds for concern.  Such disappearances are taking place around the country, and include people such as an activist from Cherkasy abducted from hospital and a former prosecutor of the Zaporizhya region and prominent human rights defender Oleksandr Shatsky.

It is an enormous relief that Bulatov has been found alive, albeit in a shocking state, as was Ihor Lutsenko after his ordeal.  It also provides graphic illustration of the message being passed to the EU, Council of Europe and other European structures regarding the importance of international attention, monitoring and immediate response to all disappearances and attacks on peaceful civic activists.