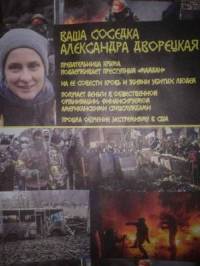 A lawyer and civic activist in the Crimea, Alexandra Dvoretska has become the latest victim of a deliberate and dangerous hate campaign directed against EuroMaidan supporters and civic activists.  It is especially ominous that the scarcely concealed threats and attempt to incite violence n every line of this poster are so closely linked with the recent government attempt to bring in draconian legislation against protesters and civic organizations in general.

The poster, in Russian, reads:

She underwent a course in extremism in the USA

As reported, one of the features copied from recent Russian legislation was the demand on all NGOs receiving money from foreign organizations or countries to register as “foreign agents”, report on their activities on a quarterly basis and pay corporate tax.   The law is a straight copy of norms in Russian legislation which have been widely condemned as aimed at stigmatizing NGOs and creating an image of them as a kind of fifth column in the country.  Ukraine’s leaders had retained the distinctly Soviet flavour of the measure while upping the penalties in the laws pushed through parliament with a breathtaking barrage of irregularities on Jan 16.  The same law criminalized something called “extremist activity” which was interpreted so broadly that it could cover any protest or activities aimed at changing government policy.  Although pressure from the protest movement in Ukraine and from the international community made the government revoke these laws on Jan 27, new draft bills have already been registered in parliament proposing exactly the same measures against so-called “foreign agents”.

This latest of many campaigns aimed at terrorising and intimidating civic activists coincided with the news on Thursday evening that AutoMaidan leader Dmytro Bulatov had been found, beaten, tortured, but at least alive.  Both he and EuroMaidan activist and prominent journalist Ihor Lutsenko may well owe their lives to the public and international response to their abduction / disappearance.  Yury Verbytsky, whose mutilated body was found in the Boryspil forests days after being abducted from hospital was not so lucky.

There are no grounds at all for taking such threats lightly.  The above-mentioned poster is overtly aimed at menacing a civic activist, and could easily place her life in danger.  The fact that two activists whose cases gained publicity were found alive is of enormous importance.  At least 30 other people have been abducted, including from hospital, or have disappeared.  Other civic activists have received threats to their lives and those of their families.

All such activities are at very least closely linked with developments at government level and are targeting those most active in the protest movement and / or lawyers defending them.

There is every reason for the Council of Europe, EU, OSCE and democratic countries in general to send high-level representatives and monitoring groups to Ukraine.  Their presence is no diplomatic formality at the moment – it could save lives.