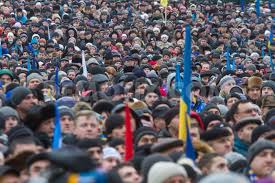 Both the police and security service [SBU] have effectively accused the opposition Batkivshchyna of planning the Kyiv protests in advance [as per the Interior Ministry] or, in the SBU rendition “carrying out actions aimed at seizing state power”.

A police statement on the official Interior Ministry website refers to a controversial search carried out on 9 Dec of the StructuralT company in Kyiv and accusations from the Batkivshchyna party whose office was next door.  Deputy chief police investigator Oleksandr Hnativ held a press conference on Jan 31 at which he claimed that the material found on the servers removed “made the interest shown by politicians to this case understandable.”

“The information on the servers concerns the activities of Batkivshchyna and show that the mass protests which began in Kyiv on Nov 21 2013 were not spontaneous, but planned in advance.”  Hnativ asserted that there is data showing that a course of events involving the use of force had been foreseen. “That is, a variant whereby force will be used against protesters which will elicit widespread publicity and undermine the authority of the current government and president”.

The material, we are told, has been sent for an expert assessment to find out whether there are actions aimed at a violent change or overthrow of the constitutional order or seizure of state power (this falling under Article 109 of the Criminal Code).

Hnativ does not mention the SBU, but it transpired that those illustrious defenders of the country and its constitutional order were also on the ball.  Maxim Lenko, head of the SBU investigation unit in a live broadcast on TV 112 Ukraine repeated the same statement, but announced that the SBU had begun criminal proceedings over actions aimed at seizure of state power.

He noted that the SBU have 2 months for their investigation, so we should perhaps expect more of such shocking revelations.

Expecting them to be believed is perhaps harder.  The protests now known as EuroMaidan began on Nov 21 when the government announced – without warning - that it was suspending all preparations for the signing of the EU-Ukraine Association Agreement.  European integration and the said agreement had been commitments made in the election campaigns of both Viktor Yanukovych and his Party of the Regions.

The first real use of force against entirely peaceful protesters came on Nov 30 when Berkut riot officers, who are under the Interior Ministry, savagely dispersed around a thousand protesters on Maidan Nezalezhnosti [Independence Square].

This, unfortunately, has not been the only time that gratuitous levels of violence have been used against protesters, nor the only repressive measures used against EuroMaidan activists.