136 journalists injured since the protests began 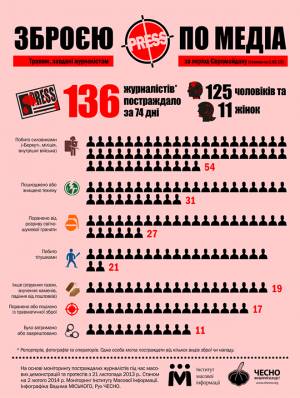 The Institute for Mass Information reports that since Nov 21 when the widespread protests in Ukraine began 136 journalists have been injured either while carrying out their work or as the result of their journalist activities. IMI counted only those cases which were linked with the journalists’ professional activities, and where journalists received real injuries or their equipment was damaged.

In 54 cases journalists were beaten by police or Berkut riot police officers;

27 journalists received injuries from the explosion of stun grenades;

21 journalists were attacked by titushki or hired thugs;

17 journalists received bullet wounds from the gunfire coming from the police on Hrushevsky St in Kyiv;

There were also 2 cases when Berkut officers aimed at journalists’ cameras, however they managed to duck and the bullets didn’t hit them;

A further 19 journalists were injured from other actions, for example, when police and protesters were pushed up against each other; from stones thrown from either side; and from teargas.

11 journalists were detained or arrested by the police.