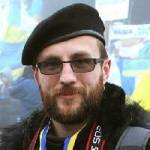 The Kyiv Court of Appeal on Wednesday refused to consider the appeal against the 2-month detention of Lviv photographer Maryan Havryliv who was badly beaten by law police on Jan 22.  The reason given was that the court had not been provided with an official document confirming that Havryliv is receiving treatment in the emergency care (ambulance) hospital  Despite the fact that Havryliv was under police convoy, the judge claimed that she did not know his whereabouts and postponed the hearing until Feb 14.

The Lviv photographer was photographing the clashes on Hrushevsky St on Jan 22 when he was detained by Berkut riot police, together with other people.  Havryliv alleges that he was taken out of the city and beaten, and only after that was he taken to the Obolon police station.  On Jan 24 a court remanded him in custody for 2 months.

Mykhailo Havryliv told Radio Svoboda that his brother is accused of illegal possession of firearms, though he had all the relevant documentation for the pistol he had with him.  According to his brother, a witness who agreed to testify in court on Feb 5 has been threatened with physical reprisals if he gives testimony in court.

Maryan Havryliv is indeed in hospital, and according to his brother, although the bruises have gone, his whole face is yellow, his nose smashed; his vision in one eye is impaired, and he has a brain and head injury.