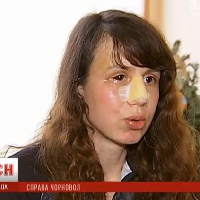 According to an Interfax Ukraine report, the Prosecutor General’s Office is terminating the investigation into the savage attack on investigative journalist and activist Tetyana Chornovol.  The case is supposedly “solved” with the investigators convinced that the attack was “hooliganism”, a case of road rage after Chornovol cut in front of another car.

Chornovol’s response was swift and to the point. In her blog on Ukrainska Pravda she writes: “The PGO have stated that the attempt on my life was because I “cut in front” of somebody and thus “provoked” their hooligan actions.  I “cut in front” of Yanukovych and will continue to do so.  That is really the only reason for the attack on me.”

A month ago, Chornovol stated clearly that she believes the president, Viktor Yanukovych to be behind the attack on her which she is convinced was a deliberate attempt on her life. She said that she had taken several steps “which irritated him personally and members of his family. That concerns his residence”.   Chornovol has in the past exposed the corrupt dealings behind the privatization of Yanukovych’s controversial residence at Mezhyhirya.  She has recently been investigating what she alleges is a new and even more sumptuous residence that the president is having built just outside Kyiv.

Deputy Prosecutor General Roman Andreyev is reported as saying that five people were directly involved in this “road rage” excess, committed out of “hooligan motives’.  The identity of two of them has yet to be established.  Two others are already in custody, namely Serhiy Kotenko, the owner of the Porsche Cayenne recorded by Chornovol’s video register and  Roman Zalyubovsky . a 34-year-old security guard from Dniprodzerzhynsk.  A fifth man, Andriy Zinchenko who has already been in trouble with the law before has been detained in Moscow.

Chornovol supposedly carried out some maneuvers which the men in the other car interpreted as causing  a dangerous situation; “they began chasing her, she didn’t stop.  During this chase there were several collisions. Finally they stopped her near Boryspil and dragged her from the car. Then Zalyubovsky and Zinchenko brutally beat her, after which they fled the scene.”

Andreyev presented a video of Zalyubovsky’s interrogation in which the latter confirms this version of events.  He says that he was driving, and that he came to Kyiv together with Zinchenko to buy a car and was trying it out.

Andreyev does not appear to have dwelled on the strange behavior of a potential car buyer who provokes several collisions in a car which would have cost several years’ salary.

Instead he expresses outrage at the beating up of a woman which “no behavior on the road can justify” and promises that the prosecutor’s office will be seeking the maximum sentences.  Under the articles of the criminal code on hooliganism and grievous bodily injury, he says, this is four years imprisonment.  Attempted murder would carry a sentence of up to 15 years.  Chornovol was brutally beaten around the head, and believes that her assailants thought her dead.

Chornovol comments in her blog that Zalyubovsky refused to take part in a face to face confrontation with her. She says that from a private conversation with him she understood that he does not know the details of what happened on the Boryspil road and therefore believes that he was not one of those who beat her, and has been used as a front man to take the blame.

Andreyev mentions two men detained since soon after the video register was posted on the Internet, around 10 hours after the attack.  He said that certain investigative activities need to be carried out and then the appropriate decision will be made regarding the former owner of the Porsche Cayenne, Oleksandr Khramtsov, who appears to have a cast iron alibi and Andriy Nasikovsky.  Andreyev claimed that there had been good grounds for detaining them, and ignored the detention of Serhiy Kotenko’s brother Oleksandr.

The Prosecutor General’s Office and investigators have ignored a great deal in this squalid attempt to explain the attack on Chornovol as some kind of excessive reaction to a woman driver.

Photos of the badly beaten journalist were in the world press for good reason, given the savagery of the attack and Chornovol’s reputation as a fearless exposer of corruption by those closest to the president.

The case began arousing concern from the earliest days with the chief investigator making unsubstantiated claims that opposition MPs, together with the head of the Udar party Vitaly Klitschko and his brother were somehow implicated in the crime.  It is worth noting that the arrest of Oleksandr Kotenko was specifically cited as “proving” the Klitschko brothers’ involvement.  In this respect, we could also mention the Jan 30 arson attack on the home of former Police General from UBOZ [the department for fighting organized crime] Volodymyr Dakhnovsky.  Soon after the attack on Chornovol, Dakhnovsky publically criticized the attempts made by the chief police investigator, Mykhailo Chynchyn to implicate the Klitschko brothers.  He corrected glaring mistakes in Chynchyn’s report and called such ignorance unforgiveable.

Andreyev’s briefing does not appear to have explained Serhiy Kotenko’s alleged involvement, especially given that Zalyubovsky’s testimony seems to corroborate Kotenko’s assertion that he was effectively hijacked with the car.  While the arrest of his brother was used by the chief investigator to try to implicate the Klitschko brothers, Serhiy Kotenko  was immediately reported as being linked with the controversial seizure of TVi and three opposition MPs.

The attack on Chornovol bemused most observers from the outset.  The journalist thankfully survived the attack, yet even the worst scenario could have only harmed those whom the journalist had criticized.  Although it was Chornovol’s presence of mind in turning on the video register which enabled the car to be tracked down so swiftly, it had been left abandoned nearby anyway, as though asking to be found.

The Deputy Prosecutor General’s briefing on Thursday coincided with an official statement from Ukraine’s Foreign Ministry expressing disappointment in the European Parliament’s “bias” and disregard for the government’s “constructive efforts” in gaining the public’s trust.  If this is one of those “constructive efforts’ – no chance.