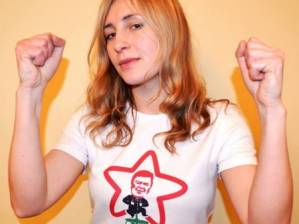 According to Volyn Regional Council deputy Ihor Huz, Maya Moskvych, leader of the youth NGO National Alliance is facing criminal charges over her part in a campaign to boycott Party of the Regions businesses in Lutsk.

He reports on Facebook. that Moskvych has been officially declared a suspect in a criminal prosecution under Article 296 ¶ 2 of the Criminal Code (hooliganism).  If she were convicted, she could face restriction of liberty for up to 5 years or imprisonment for up to four years.

On Feb 5, activists arrived at businesses owned either by members of the Party of the Regions or people controlled by them. They handed out campaign material, posted signs and poured out buckets of water dyed black outside the doors of their offices.

Huz says that the complaints to the police came from local leaders who represent Party of the Regions business in Volyn, and promises to make sure that their names are made public.

He adds that the court hearing on a preventive measure is due in a few days and believes that the prosecutor may yet again demand that Moskvych is put under house arrest with an electronic bracelet.

As reported, back in December 2013 criminal charges were laid against Moskvych and five other people, including Volyn deputies and she was put under house arrest with an electronic bracelet.  The prosecutor had in fact asked for her to be remanded in custody, claiming that she would otherwise be able to communicate with people through social networks.

Moskvych was then charged, together with five other public figures, well-known in Volyn, seemingly with "denigration" of portraits of Viktor Yanukovych/ The charges were linked with a protest on Dec 2 over the violent dispersing by Berkut riot police of the peaceful EuroMaidan protest in Kyi on Nov 30 and the authorities’ silence over this.  The activists took three portraits of the president out of the Council buildings carrying them upside down.  The portraits were later burned.  There is nothing in Ukrainian legislation to justify qualifying any treatment, however contemptuous of the president’s portrait as a criminal offence.