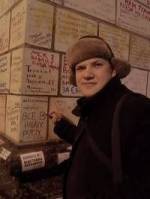 EuroMaidan SOS reports that Oleksandr Yasenchuk, activist of the Chernihiv EuroMaidan and member of the Prostir Svobody [Realm of Freedom] movement was attacked on Sunday night. Three men approached him near his home as he returned from a meeting with other activists. They hit him around the head, arms and legs with reinforcement bars. As well as injuries to his arms and legs, he has concussion and needed 7 stitches for a head wound.

Oleksandr is convinced that the attack is linked with his civic activism. He has been actively involved in the protests in Chernihiv and coordinated consignments of aid for the Kyiv EuroMaidan.

He told friends and fellow activists that the assailants have caused physical injuries but only hardened his resolve and given him new energy.  He thanks all those who have expressed their support since the attack but says that we should not give our enemies the pleasure of seeing us whimper and complain. He has no intention of giving up his chosen path as a journalist and civic activist.