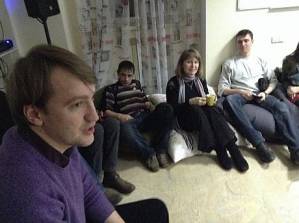 Just before the attack

On Thursday evening around 30 young thugs burst into the Clever House Café in Donetsk during a meeting with civic activist and leader of the People’s Strength movement, Oleksandr Solontai.   They beat up people and smashed equipment.

Civic activists in Donetsk report that the police may have been involved in bringing the thugs in, and then detained a number of activists, and at least one journalist from Donetsk News, Vitaly Sizov.  They were all taken to the police station.

Solontai asked why he had been detained, and was told that this was in connection with the conflict, however not one of the assailants would seem to have been detained.

Around an hour or so later, the activists and journalist were released, probably because of enormous media attention.  Explanations have been taken from those detained, and unfortunately it is by no means guaranteed that charges will not be trumped up against them.

As reported, such techniques have been used in a number of other cities, most notoriously in Dnipropetrovsk and Zaporizhya on Jan 26.  Video footage of people being savagely beaten by titushki [hired thugs] with police officers present can be seen here https://youtube.com/watch?v=pUHNj2ERMMg#t=21 while here titushki and police are filmed running together  https://youtube.com/watch?v=pUHNj2ERMMg#t=21