Winners and losers from compliance with ’hostage law’ 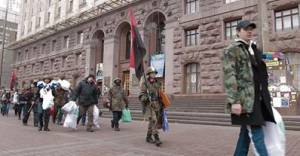 The danger of ‘Maidan fatigue’ and mounting repression  probably prompted the moves this weekend  by Maidan and political opposition leaders to comply with the much criticized Jan 29 ‘hostage law’.  The law offered to drop charges against protesters in exchange for other protesters vacating all government buildings and freeing up the streets.  While a way out of impasse was undoubtedly needed, there was clearly no united front on the issue.  Many remain concerned that the ‘hostage trick’ has effectively worked, resulting in the focus being distorted and total impunity for officials accepted.  Although the Prosecutor General’s website has posted confirmation that the law will come into force on Monday, there are also serious doubts as to its scope.

At around 10 a.m. on Sunday the Kyiv City State Administration was handed over to the head of the KCSA, Volodymyr Makeyenko, in the presence of ambassadors and representatives of the OSCE.  The protesters who originally (and rather controversially) occupied the building on Dec 1 were clearly skeptical and promised to be back (‘seriously, and for good’) if the conditions are not met.  Some were still positioned outside the building on Sunday evening.

Heavy equipment was used through Saturday night to make a four-meter gap in the barricades on Hrushevsky St.  Maidan Council representatives were swift to reassure people that only vehicle access was needed, and that the barricades would not be dismantled altogether.

The agreement has clearly involved intermediaries from the OSCE and probably other countries.  So far the EuroMaidan side seem to have complied with their agreements, and as of Sunday evening the Prosecutor General’s website is reporting that the law will come into force from Feb 17 2014.  The ransom, one assumes, has thus been paid.

The first problem is in the scope of the law – which charges are to be dropped.  The ‘hostage’ aspect of the bill lay in the fact that it would only come into force, with Feb 17 the deadline, if the buildings were vacated, etc.  Despite this, Prosecutor General Viktor Pshonka has stated that the charges to be dropped are only those referring to allegedly unlawful actions between Dec 27 and Feb 2.   This means that controversial criminal proceedings against members of the Kyiv and Lviv Maidan Self-Defense units may remain in force.  Tackled on the subject, VO Svoboda leader Oleh Tyahnybok acknowledged this to the case, and simply called for ‘increased pressure on the authorities’.  Neither he nor Arseny Yatsenyuk, leader of Batkivshchyna, specified how such pressure was to be applied. The third main opposition leader, Vitaly Klitschko [Udar] was not present at all.

It is galling that a law which may have been officially published on Feb 2 but is really only to come into force on Feb 17 already excludes people whose prosecution arouses concern.  There are other cases which are slipping past both ‘amnesty laws’ although widely viewed as having nothing to do with rule of law.  One such prosecution is that of Viktor Smaliy, Road Control lawyer accused very controversially of an attempt on the judge who remanded his client, Road Control journalist Andriy Dzyndzya in custody.

Reports on Sunday also suggest questionable measures aimed at obtaining maximum PR mileage.  Ukrainska Pravda, for example, reports that a video has been posted on the Internet showing some young louts smashing up the Kyiv administration building after it had been vacated   If this is the case, then they also probably responsible for the image of a swastika (in a frame!) apparently found in the building. Such ‘discoveries’ on Monday would have been a great coup for the authorities.

The greatest concern, however, remains those now covered by these pseudo-‘amnesty’ bills – both that from Jan 16 which unwarrantedly extended the scope of the original law to cover police and other officials implicated in the events up till Dec 26, and the law which the president, Viktor Yanukovych personally pressured MPs from the Party of the Regions to adopt on Jan 29.

Yevhenia Zakrevska, defense lawyer for some of those facing criminal charges, as well as for victims of Berkut riot police violence on Nov 30, expressed outrage in a blog on Ukrainska Pravda entitled:  Victims’ short memory is the guarantee of success for blackmailers.  Zakrevska was writing soon after it was learned that all criminal charges had been formally dropped against the pitiful and rather symbolic few officials over the brutally dispersing of peaceful protesters on Nov 30.  As reported, the criminal charges against Oleksandr Popov, head of the Kyiv City State Administration and Volodymyr Sivkovych, deputy head of the National Security and Defense Council and around 3 others have been dropped ‘in compliance with the [first] amnesty law’.  It was clear back in December that there was no will to find those responsible and punish them, probably because the order to deploy Berkut forces was believed to have come from very high up.

The District Administrative Court ruling from Dec 23 ordering that the police provide copies of all documentation proving who gave and carried out the orders seems to have been forgotten.  This is catastrophic given clear evidence that the deployment of Berkut officers and the indiscriminate violence that they applied were in grave breach of the law.

According to Zakrevska, “the authorities have as clearly as possible demonstrated that one of the conditions for ‘a ceasefire’ is the total impunity of the police and others guilty of beating people up.  For me, as the lawyer of victims of those crimes, a group of individuals including MPs, prosecutors and judges have simply deprived me of the last legal instrument for defending my clients within the framework of Ukrainian legislation.”

She says that she, at least, has not forgotten why people came out in huge numbers of Dec 1 last year and what they stayed there for.  This, she suggests, may indicate an abnormally long memory, since others seem to be suggesting that the main demand of people on Hrushevsky St was the freeing of hostages.

The activists who occupied Hrushevsky St on Jan 19 had originally been prevented by Berkut and interior ministry forces from expressing their legitimate protest over a package of highly repressive laws illegally pushed through parliament.  The laws gave a legislative coating to repressive measures which had already been applied since the beginning of the EuroMaidan protests.  Some of the measures in the laws officially revoked on Jan 28, specifically those extending police powers, have already been slipped in through Cabinet of Ministers Decrees.

Most importantly, both the Jan 16 amendments to the ’amnesty law’ and the ’hostage law’ of Jan 29 grant effective immunity from prosecution for those police and other officials guilty of grave abuses. There are ways around this in principle: neither law, for example, waives responsibility for torture (Article 127 of the criminal code).  The will to prosecute law enforcement officers under this article has always been lacking, and it is difficult to believe that this is likely to change now. The blunt realism of highly experienced analyst Anders Aslund must be headed, and the situation of impasse could not have continued.  The price of this partial solution – effectively total impunity -  does, however, seem perilously high.