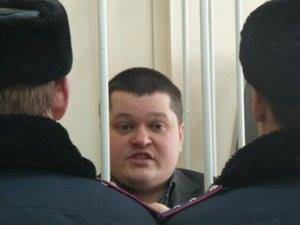 Road Control lawyer, Viktor Smaliy has been held in SIZO [remand unit] since Dec 9.  The charges against him seem clearly fabricated, yet even if true would not warrant the measures against him

The case is dragging on with the Kyiv Court of Appeal on Friday rejecting an application to have the case heard (as it’s supposed to be) according to territorial jurisdiction and returned it to the Dniprovsk District Court in Kyiv.

As reported, Smaliy was taken into custody in the courtroom where he had been defending Road Control journalist Andriy Dzyndzya.  The latter had been arrested and charged with involvment in the commandeering of the bulldozer used in disturbances on Bankova St on Dec 1 2013.  Those disturbances in an otherwise huge and peaceful demonstration are widely believed to have been orchestrated, while the charges against the prominent journalist were viewed as persecution. Dzyndzya has now been released under the first so-called ‘amnesty law’.  His lawyer has not, although the charges against him seemed - and seem - deliberately aimed at sending a message to lawyers defending peaceful protesters, as well as part of a general campaign against the civic watchdog Road Control which regularly uncovers infringements by the traffic police.

The charges arose from an incident after Judge Volodymyr Buhil announced that he was remanding Dzyndzya in custody for 2 months.  There was protest in the courtroom, and an incident which Buhil decided to treat as Smaliy attempting to murder him.

The charge appears to have been mellowed since then, and Smaliy is charged with attempting to inflict minor bodily injuries on a judge carrying out his official duties (Article 15 § 2 - the attempt and 377 § 2 – inflicting minor or medium seriousness injuries on a judge) .  The said ‘offence’ is even difficult to verbalize. It is considerably harder to fathom how it could have been used to keep a man in detention for over two months with no end in sight.

Road Control reports that Smaliy is supposed to have ripped the judge’s robe after the latter read out his ruling regarding Dzyndzya.  It says that Buhil misled the investigators and shows the video in which testimony is given by supposed ‘witnesses’ but without Smaliy being present.

Buhil claims that Smaliy grabbed his arm with his left hand and raised his right hand as though to strike him.

Court police officer Bohdan Linden went even further, asserting that Smaliy had positively made a fist and then raised it as though to hit Buhil on the head. Linden claimed that he intervened and grabbed Smaliy’s hand, thus preventing the attack.  Three court officials gave similar testimony.

Judging by the last scene on the video available here http://roadcontrol.org.ua/node/2066 none of this bears any relation to the truth.

It all happens so quickly that it is difficult to say what is going on, however it is clear that the testimony given was false, since:

Smaliy didn’t grab Buhil’s sleeve with his left hand, nor did he raise his right hand to strike;

Linden was not there at all;

The claim made by other supposed witnesses that nobody else except Smaliy was near the judge is also manifestly not correct.

The video has been handed to the court and even if it is unclear what did take place, it is entirely evident that the ‘testimony’ given is false.

Thus far this has had no impact on the court and this shameful case continues.