Blood and Berkut Sniper Bullets on the President’s Hands 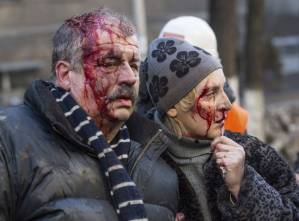 Two of those whom the authorities call "extremists"

The first reports that Berkut riot police were positioned on roofs and aiming rubber bullets and grenades at protesters came early on Tuesday.  They almost certainly preceded the later disturbances and the two women who received wounds were very clearly peaceful protesters.

This soon changed, and the conflict became ugly.  As of 1 a.m. on Wednesday, at least 20 people are reported dead, and the centre of Kyiv is burning.

It is those later images that have been published in the world media and that have prompted European and North Atlantic countries to issue statements condemning the violence and calling for “both sides” to renounce force and sit down at the negotiating table.  Ukrainian oligarchs have also grabbed the opportunity and called for “an end to violence”.

Some western commentators are refreshingly blunt.  David Kramer from Freedom House has stated that “legitimate democratic leaders do not order riot police to attack protesters asking for a more open government, Yanukovych has forfeited his legitimacy and needs to step down”.

The following are just a few of the day’s events that strip any regime of its legitimacy.  More will become clearer over the coming days.  Time however is not on Ukrainians’ side now that the president, Viktor Yanukovych, doubtless buoyed – or bound – by Monday’s 2 billion loan from Russia has chosen bloodshed.

The reports from Tuesday morning showed ordinary protesters preparing for a march on parliament.  The pro-presidential Party of the Regions was blocking attempts to even table a draft law proposing changes to the Constitution.  Berkut riot police blocked the streets to prevent the protesters even approaching parliament.  Judging by those early reports, and confirmed by photos, Berkut snipers began shooting (then only rubber bullets) and hurling grenades very early on. It is almost certain that later in the day they used live ammunition.

This is categorically not the behaviour of a legitimate democratic government, but there is more. There have been reports from morning of large number of titushki or hired thugs in the centre.  They were seen provoking conflict, looting and some reports suggest that they may have shot at Berkut officers.  There is also a video clip which appears to show a protester injured, perhaps killed, by fire from titushki.

Can such reports be treated as standard attempts to blame the other side for any escalation?   There is ample evidence of such use of titushki over recent months, as was noted by the Council of Europe’s Human Rights Commissioner during his visit to Ukraine.  The assertion by the police that 7 officers have been shot and killed seems at least strange since none of the western or Ukrainian media reports speak of protesters using firearms.

The government has tried to present the protesters as “extremists”, and has called the use of force to clear the EuroMaidan demonstrators on Maidan Nezalezhnosti “an anti-terrorist” action.   Despite the violence and the number of deaths, the numbers on Maidan have not abated.  Some thirty thousand people simply by virtue of their numbers can hardly be called “terrorists”.  They do not fit the description in any other way either.  Through the evening, they have been singing the Ukrainian national anthem, taking part in public prayer and listening to addresses, including one from Mustafa Jemilev, veteran defender of the rights of the Crimean Tatars and Soviet political prisoner, who expressed pride in his fellow Ukrainians.

These “terrorists” are being treated, when injured, by a medical service made up solely of volunteers, some of whom have themselves come under attack.  The EuroMaidan Civic Sector reports that with Berkut setting protesters’ tents and some buildings on fire, the medical unit has been forced to move to the Myhailivsky [St Michael’s] Cathedral.   A large number of people have been detained, with lawyers not allowed to see those held at 5 police stations

During meetings with EU and Council of Europe representatives at the end of January, EuroMaidan and human rights activists spoke of credible rumours that a crackdown would be attempted after the middle of February.  The timing was linked with the fact that the Sochi Olympics would then be drawing to an end, and Russia would not need to fear any boycott of its games.   Over the weekend that danger seemed to have abated with Maidan and opposition negotiators showing readiness to comply with the notorious “hostage law” by vacating government buildings, clearing part of the road, etc, in order to get the charges against a huge number of protesters waived.

The announcement on Monday that Yanukovych had agreed another loan of 2 billion from Russia led to considerable speculation as to what the agreement had entailed.

Tuesday began with Ukrainians of different ages, professions, ethnic origin and faiths endeavouring to present demands which are legitimate in any democratic country. The descent into violence and bloodshed is indeed a cause of deep concern.  When the president and those under his control use Berkut sniper bullets, paid thugs and excessive violence against their own people, instead of allowing them to protest and demand changes in legitimate manner, it is time for that concern to be translated into action..