Ever more victims of sniper fire 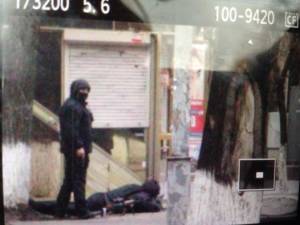 The Maidan medical service are calling on the press to get to Ukraina Hotel as they need to make an open statement regarding large numbers of victims of sniper fire in Kyiv. The photo here clearly shows that the authorities’ denials are false and that deomonstraters are being deliberately shot and killed by professional snipers

Olha Bohomolets who is in charge of the volunteer Maidan medical service reports that 13 activists near the Ukraina Hotel (on Institutska St and very close to Maidan) have already been killed by snipers.

She is asking representatives of TV channels to try to get through to them as the medical service want to make an open statement to the government and Party of the Regions deputies.

The photo above was taken by well-known journalist Mustafa Nayem, and gives the lie to all the assertions made by the authorities that no snipers are being deployed.

While if on previous days reports of police officers being shot and killed deserved to be treated with caution, on Thursday reports suggest that some of the demonstrators also have arms, though they are still in an absolute minority.

There are reports of Berkut using arms capable of penetrating bulletproof vests and other equipment appropriate in warfare, not against protesters even in a situation of open confrontation.  In almost all cases it is clear from video footage that the snipers are aiming at unarmed protesters.  They have also shot at medical staff and others trying to help the injured.