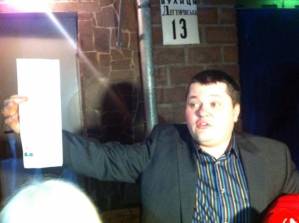 Viktor Smaliy was arrested on Dec 9 2013 while representing his client, Road Control journalist Andriy Dzyndzya.  He was charged initially with attempted murder, then attempting to inflict light bodily injuries on a judge.  The charges were absurd and seemed both part of a general offensive against the civic watchdog Road Control and a lesson to other lawyers to watch their step..

Smaliy’s release was announced in the Verkhovna Rada by parliament’s authorized representative for working with the Prosecutor General’s Office, Oleh Makhnytsky who said that Smaliy was the last activist to be held in custody.

It is not quite clear whether Smaliy is still facing charges or whether these have been dropped.