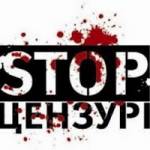 The journalist movement Stop Censorship writes that “over the three months of protests which ended in a popular uprising and the change in leadership in Ukraine, Viktor Yanukovych’s regime waged an information war with Maidan. We witnessed numerous cases of censorship; muffling of important information; hate speech; disinformation and manipulation. Journalists from the TV channels UTV-1, Inter and Ukraina; the journalists Forbes Ukraine, Korrespondent and other media resigned or openly spoke of censorship and being coerced to infringe journalist standards.

The price of the lies proved too high.  Media under Yanukovych’s control distorted events in Ukraine, the motives and conditions of the protest movement, trying to discredit its participants as “extremists”, “far right radicals” and “young louts”.  This heightened the law enforcement bodies’ aggression and their willingness to obey criminal orders.  Misinformed citizens took part in anti-Maidan demonstrations and pogroms, and they are at present becoming involved in separatist rallies in the East and South of Ukraine.”

The statement explains that media monitoring found the most censored news to be that on the State-owned UTV-1 and TV Inter.  High-viewer Inter bears particular responsibility for infringing the public’s right to a full and reliable picture of events.

Stop Censorship therefore demands that the owners of Inter – Dmitry Firtash and Serhiy Lyovochin, and also the Cabinet of Ministers and Verkhovna Rada dismiss from Inter and UTV-1 the managers who were in charge of the censorship.

The following should bear personal responsibility for the tragedy that claimed the lives of a hundred people and left several hundred maimed:

the head of the Inter Media Group Hanna Bezlyudna;

the director of the National Information System, Anton Nikitin;

the director of UTV-1 Oleksandr Panteleimonov.

If the owners of the channels do not draw the appropriate conclusions, including with regard to staffing who share the blame for the tragedy, Stop Censorship will be forced to demand from the new makeup of the National Broadcasting Council that these channels are stripped of their licenses.

It calls on the journalists and presenters from those channels and Ukraina, which is owned by Rinat Akhmetov, who deliberately misinformed the public and slandered peaceful protesters and those taking part in the uprising to resign.  By now imitating mourning for people whom they were throwing mud at just days ago, the journalists and presenters are insulting the memory of those slain.

They also call on all journalist teams around the country who came under pressure to endorse this appeal and to demand the dismissal of those managers responsible for the pressure.  Together with Stop Censorship; the National Media Trade Union and the Verkhovna Rada Committee on Freedom of Speech, they should demand guarantees from media owners that they will not resort to censorship in the future and help to draw up mechanisms for public monitoring of media editorial policy.

Stop Censorship also demands that media owners ban those political spin doctors and media personalities who systematically spread misinformation and slander, acting effectively as agents for Kremlin or pro-Kremlin propaganda.  They believe that the following should become persona non grata in Ukraine’s media:

Media owners and top managers must stop “hiring out” live talk shows to political parties which results in them becoming a manipulative game for spin doctors.

“We have the chance now to begin a process of purification of the media which will enable us in the future to be proud of our journalist profession. Let’s not waste it!”