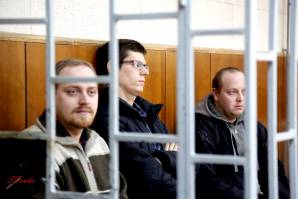 Please sign a petition asking for a review of the gravely flawed “case of the sacristans” [“справа паламарів»]  Three men are facing 13 and 14 year sentences over a crime nobody believes they committed because Viktor Yanukovych once ordered arrests within the week.  Please help move the justice system away from such distortion, and help three of its victims

Three young men have been held in custody for almost four years and are facing 13 and 14 year prison sentences.  From the outset nobody has believed that the two sacristans and brother of one of them are guilty of the Zaporizhya Church bomb explosion in July 2010, yet everybody has assumed that they are “doomed”.

This assumption is linked with the role played by Viktor Yanukovych. The now former president back in 2010 appeared in a live television broadcast ordering that those responsible for the blast were found within the week.

Three young men were found. Seven “confessions” were beaten out of them, and despite the lack of any evidence and flagrant infringements of all procedural norms, they were sentenced to 14 and 15 years imprisonment.  The appeal court judges showed that they were aware of the grave flaws in the case yet upheld the conviction, only slightly reducing the sentences. The young men are currently awaiting examination of their cassation appeal.

For three months Ukrainians defended their right to a decent life and to a law-based, free and European country.  In such countries innocent people are not, and cannot be “doomed” to spend 14 years in prison.

Ukrainians freed the country of a president who sent snipers to kill unarmed protesters.

It is time to finally put an end to presidential justice.

Please sign our petition supporting review of the “case of the sacristans” and the release from custody of Anton Kharytonov; Serhiy Dyomin and Yevhen Fedorchenko, pending the outcome of the review.

Circumstances of the Case

When in 2010 a bomb exploded in the SvyatoPokrovsk Orthodox Church under the Moscow Patriarchate in Zaporizhya, the president Viktor Yanukovych announced that he was taking the case under his personal control. In a live broadcast on nationwide television he demanded arrests within the week.

The first young man, Anton Kharytonov, a suspended sacristan of the church, was taken to the police station the next morning.  His detention was only formally registered 13 hours later, immediately before his first “confession” and night interrogation.  Over the following days he made another three contradictory confessions.

His brother, Serhiy Dyomin, was taken into custody that same evening without any record of detention for well over a day.  During a night interrogation on July 31, he confessed to making the bomb and even tried to demonstrate how he had done so.  After specialists queried his knowledge and ability to do so, he made a second, quite different confession, this time to having bought the explosive device “from an unidentified individual”.

Despite very serious grounds for believing that the seven confessions were obtained through torture, threats and psychological pressure, there has never been an investigation.

Quite the contrary, when two forensic psychologists from the Donetsk and Luhansk Institutes of Forensic Analysis provided detailed assessments confirming that all men had been placed under (at least) psychological pressure and had not given evidence independently, without being asked leading questions, the judge, Volodymyr Minasov simply ordered a third assessment.  That found no pressure, but detected an “inclination to criminality”.  The defence’s application to have all three forensic psychologists questioned in court to ascertain the reason for such divergent assessments was turned down.

Minasov did not demur or ask inconvenient questions when, over a year after the trial had begun, the prosecutor suddenly “applied” to change the indictment against the three defendants, despite the prosecutor having breached all procedural norms.  He did not, for example, explain why the indictment needed to be changed.  It is clear why he preferred not to do so, since one of the changes removed all specification of time where this clashed with the young men’s unbreakable alibis.

The behaviour of the appeal court judges is especially galling. Over a number of hearings, the judges of the Zaporizhya Court of Appeal asked excellent questions which the prosecutor was unable to answer.  These highlighted grave procedural infringements, including the fact that the amended indictment was missing from the case material. The judges learned that nobody had tried to find the person from whom, according to the investigators, Dyomin had bought the explosive device.  Other examples can be found here   They all suggested at very least a ruling that the case had not been fully investigated (grounds for revoking the sentence)..

Justice and the law seemed a hair’s breath away from prevailing.

Whether or not the judges came under direct pressure is not known, however the presidential form of “justice” won out and on Oct 25, 2013, presiding judge Yury Boikov announced that they were reducing all sentences by a year, but upholding the verdict.

This is not the only case where Yanukovych’s public orders led to a flurry of arrests which have then been upheld by the courts.  These three young men are facing long sentences and if the case is not reviewed even now, then what has the Maidan protest movement achieved?

More information about the case can be found here.