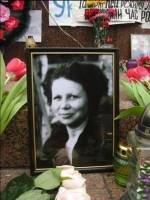 A huge number of residents of Khmelnytski came out to bid farewell to 72-year-old Ludmila Sheremet who was killed by automatic rifle fire from inside the Security Service building in Khmelnytski on Feb 19.  The was posted on the Internet shortly afterwards.  It came at a time when there were harrowing images of unarmed protesters being shot and killed in Kyiv, but was the first time officials had shot and killed a person outside the capital.

Ludmila Sheremet worked as an anaesthetist.  The shots on Feb 19 were so unexpected that for a few seconds nobody understood what had happened.  They ran back to where Ludmila Sheremet was lying, shot in the head.  She died in hospital on Feb 22.

As well as family and friends, thousands of Khmelnytski residents came to pay their respects. 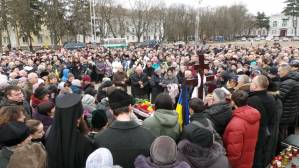