Crimea: Anti-Semitic card and other provocation in time of siege 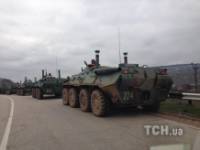 Clear attempts over the last two days to provoke violent confrontation in the Crimea, as well as the worst act of anti-Semitic vandalism in 20 years seem to confirm the warnings from authoritative Russian analyst Andrei Illarionov that Putin wants to provoke civil war in Ukraine

Gross anti-Semitic graffiti has appeared in Simferopol on the second day of the effective siege of the city by armed Russian-speakers in uniforms without any identifying marks.

The Ner Tamid Synagogue belonging to the Progressive Judaism Community had a foul piece of graffiti daubed on its outer wall.  The words “Death to Jews”, with an offensive word used; are surrounded by a swastika, Celtic wolf’s hook and Wolfsangel.

The Euro-Asian Jewish Congress points out that the Wolfsangel painted is, in fact, a back-to-front image of the symbol normally used by Ukrainian radical nationalists.

Viacheslav Likhachev, an analyst who has long monitored anti-Semitism and xenophobia in Ukraine notes drily that this vandalism has suddenly appeared in a city under the control of unidentified pro-Russian separatists.  He cannot recall anything of the kind during the three months of EuroMaidan protests in Lviv, Chernivtsi or Kyiv under Maidan Self-Defence units.

As reported, both the Yanukovych regime and Russian propaganda have tried very hard to present the Maidan movement as “fascist”, “anti-Semitic”, xenophobic and anti-Russian.  They have run up against a number of major difficulties, not least the active involvement in the Maidan protests of people who would logically have most to fear if the propaganda hype were true.  This includes Jewish people, Crimean Tatars, people from other ethnic minorities.  Two of the people who died defending Maidan – Serhiy Nihoyan and Georgy Aratunyan – were of Armenian origin.

This line was attempted by Viktor Yanukovych at a press conference given to Russian journalists in Rostov on the Don on Feb 28.  He claimed that “Crimeans don’t want to obey nationalists and Bandera-supporters. This is the wish of simple people, Crimeans to self-organization, creation of self-defence units which are currently being formed in the Crimea.”  Yanukovych did not explain how these “self-defence units” have come by large amounts of Russian tanks and other military equipment, not to mention huge amounts of arms.

Putin’s silence which Yanukovych purportedly found baffling is nothing of the kind, of course, if one considers the clear synchronization of events.  Within hours of these supposedly mysterious gunmen who do not seem to have recognized the Crimean prime minister, Anatoly Mohylyov, seizing the Crimean parliament, deputies were allowed in.  The latter obligingly voted for a government under Russian Unity Party politician Sergei Aksenov.  His “election”  more or less coincided with news that Viktor Yanukovych had emerged with a statement and promised press conference, Despite the former Ukrainian president having been in hiding since abandoning his residence and presidential administration on the evening of Feb 21, Yanukovych has claimed that he remains president and Aksenov that he answers to Yanukovych.  Putin is keeping his distance but has refused to accept the new government in Kyiv, recognized by the West.  Aksenov is now reported by the Russian Interfax agency as having appealed to Putin “for assistance”.  Brotherly, of course…

None of this is presented to Russian television viewers who are constantly fed stories about how the Maidan movement and those now in government are “banderovtsi” [supporters of the controversial nationalist figure Stepan Bandera], fascists etc.  This propaganda is widely spread in the Crimea as well.  While there are serious grounds for believing Russia to be playing a direct role in the latest conflict, it is true that some ethnic Russian residents in the Crimea have been duped by an endless stream of horror stories about “fascists” and “extremists”.  It must also be said that the new government could have been considerably more sensitive over the language issue, given the fact that most residents of the Crimea are Russian-speakers. Instead it immediately revoked the 2012 language law which heightened the role of the Russian language. The law was highly controversial and entirely unconstitutional, but the haste could only antagonize and worry people who were already anxious about the change in leadership.

Returning to the anti-Semitic vandalism, Anatoly Gendin, head of the Association of Jewish Organizations and Communities of the Crimea, called it the first such case in twenty years.  He believes provocateurs are trying to set ordinary citizens against others, inciting them to look for scapegoats for the problems in the country.

The attempt on Thursday night to seize the Mejlis of the Crimean Tatar People, and now this attack, seem very clearly aimed at provoking trouble.

For these and a number of other reasons, while Barak Obama’s clear statement on Friday night about the inadmissibility of military interference in Ukraine is welcome, one can only hope that the US president is being fully briefed on the assessment of important analysts.  Once again it is well worth noting the comments of Russian economist and once presidential adviser, Andrei Illarionov.  In a blog entitled “Putin’s terrible vengeance against Ukraine”, he writes:

Putin doesn’t want to fight at the moment.

At the moment he wants fighting in Ukraine.

He wants Ukrainians, Russians and Crimean Tatars to fight

He wants a fully-fledged civil war in Ukraine.

He suggests that all the military maneuvers; seizure of government buildings and airports; the appointment of a new prime minister whose party gained all of 3% of the votes at the last elections; etc; as well as Russia’s protection of “criminal Yanukovych” and more are aimed at starting civil war in Ukraine.

Illarionov warns that a “fifth column of provocateurs” have already become involved, demanding that the new government use force against “the bandits and terrorists”.

The new government must be forced to react, with the aim being any casualties, due to confrontations, and the authorities’ action.  Casualties from all sides, all parts of the country; all faiths.

“As always, it will be “very good” if there are attacks on Jews and synagogues”

The aim is chaos, bloodshed, confirmation of Putin’s words back in April 2008, that Ukraine was not a fully-fledged country, and the bliss of seeing Ukrainians pleading on their knees for Russia to save the day, impose strict order.

This would be Vladimir Putin’s terrible vengeance “against free Ukrainians daring for the second time over the last decade to not only not heed the orders of the Kremlin boss, … but to begin showing the whole world both the riches they’ve plundered, and the tools, mechanisms and techniques for maintaining just such a criminal regime”.

For Ukrainians, he stresses, the main task now is to not let themselves be provoked “into mass suicide”.

The words are very strong but then the stakes could not be higher.