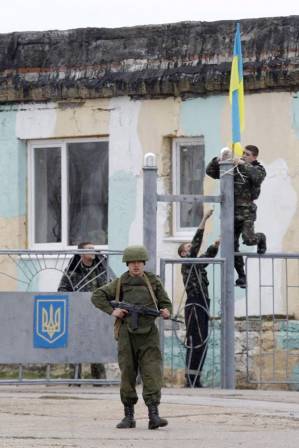 Between 50 and 100 Ukrainian soldiers carrying no weapons, only the Ukrainian flag, as well as that of their unit, walked onto the military airfield. 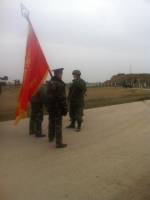 The situation, as can be seen in the video, was enormously tense with the Russian soldiers brandishing rifles obviously stressed.  They fired warning shots into the air but the soldiers did not stop.  There was an argument between the soldiers with the Ukrainian commandeer, Yuliy Mamchur demanding that the Russians free the airport and allow his men to begin work.  The Russian officer refused, saying he had no orders to do so. He allowed 10 Ukrainian soldiers responsible for ensuring the everyday running of the airport.  The other 100 men remained standing near the Russian soldiers.   The video clip can be watched here:

The Ukrainian soldiers after the first shots continue on their way singing – in a somewhat military fashion – the Ukrainian national anthem.