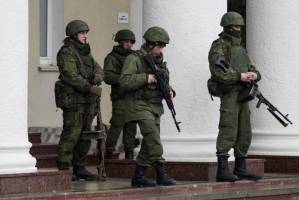 The armed soldiers without insignia who will presumably play their role in the "March 16 referendum" (Photo: Reuters)

Nobody expected a proper “referendum” from the puppet government in the Crimea, but it would be difficult to imagine anything more farcical than the ballot paper posted on the Crimean parliament’s website.

The document, in three languages – Russian, Ukrainian and Crimean Tatar – contains the following:

Ballot Paper for the all-Crimean referendum of March 16, 2014

Mark with any symbol in the box beside the variant of the answer which you are voting for.

1.  Are you for the Crimea re-uniting with Russia, as a subject of the Russian Federation?

A ballot paper left unmarked, or where both variants are marked shall be invalid.

There are multiple problems with this document.

Firstly, there is no possibility of voting for the status quo.  Those who choose to take part in this event can place their doodles, signature or tick for one of two very different options: becoming a part of the Russian Federation or reinstating a constitution in force for around 13 days back in 1992 which declared Crimean independence.

It is just conceivable that some voters will know that on May 5, 1992 the parliament of the Autonomous Republic of the Crimea adopted a “Declaration of State Independence of the Republic of the Crimea”, and that a constitution under these conditions was adopted the next day.  It was suspended on May 19, and considerable amendments made on September 25 that year.

It is more likely that squiggles will be given to the first option which is at least comprehensible.

Secondly, it is also quite unclear how the result of this vote is to be determined, with no indication as to the minimum turnout. .

A monumental change to the peninsula would not only be guaranteed by the lack of an option for staying put, but some pitifully small number of people could decide whether the Crimea becomes a part of Russia or goes it alone altogether.

Referendums in general need to have clearly articulated questions to which people answer yes or no.  They should also not take place under the watch of armed soldiers without insignia speaking Russian without an accent.

The decision to bring this “referendum” forward to March 16 was passed behind closed doors a mere 10 days earlier, on March 6.  Parliament “decided” to join Russia and to have this “confirmed” by referendum.

The explanatory note asserts that “nationalist forces, having seized power through an unconstitutional coup are flagrantly violating Ukraine’s laws, inalienable rights and freedoms, including the right to life, freedom of thought and speech; the right to speak ones native language. Extremist gangs have made a number of attempts to get into the Crimea in order to exacerbate the situation, cause an escalation in tension and unlawfully seize power”.

It was never possible that this so-called referendum could have much credibility since Ukraine’s Constitution clearly stipulates that any change in Ukraine’s territory must be put to a nationwide referendum.  That the puppet government in the Crimea and the Kremlin should have resorted to such an inept and thuggish parody was harder to anticipate.

Even a legitimate referendum could not be organized in 10 days.  Ukraine’s new leaders have stated clearly the vote will not be recognized and the Central Election Commission has suspended access to the Voter Register in the Crimea and Sevastopol (which has separate status according to Ukraine’s Constitution).

Attempts to present this as an infringement of the rights of people in the Crimea will also not wash.  The Mejlis of the Crimean Tatars has called on all residents of the Crimea to boycott the event.  The lack of support of the Crimea’s indigenous people, up to 15% of the population, strips it of any legitimacy.

Western countries, as well as the UN Security Council have made it quite clear that the result will not be recognized.  That should have made Aksenov and his Kremlin patrons back down.  Instead they appear to have opted for grotesque farce. 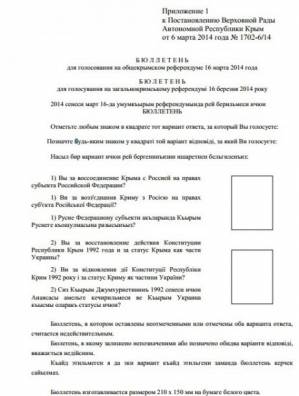