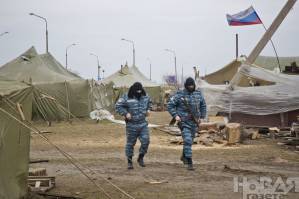 Those EU countries believing that stern words and symbolic sanctions will suffice in the present crisis should think again.  Russian troops have set up camp and have laid mines in the neighbouring Kherson oblast.  A school caught directly between Ukrainian and uninvited and therefore enemy Russian troops has told parents to keep children at home.

The school is positioned between Ukrainian and Russian forces

The original report in Kherson News was based on information and photos provided by Kherson journalist and civic activist Oleg Zaichenko.  Since then LB.ua and other media have investigated and received confirmation from other sources.

The settlement of Chongar in the Kherson oblast has a population of just one and a half thousand people.  Since the end of February it has basically found itself positioned between Ukrainian forces and Russian military.  Vladimir Putin recently denied that Russian troops were being deployed in the Crimea, claiming that the men in uniform without insignia were from Ukrainian “self-defence brigades”.  Even if individual officers had not admitted being Russian to at least one CNN journalist, as well as Polish TV, the denial is manifestly absurd.  Huge numbers of armoured personnel carriers and soldiers have been pouring into the Crimea since Feb 27.

It now transpires that they have been setting up camp in the neighbouring Kherson oblast.  As the photos show, at least one field has been turned into a minefield, armed personnel carriers have been dug in and camps set up.

Journalists now in Chongar say that no soldiers have entered the settlement but report that the digging of minefields began from the first day of the Crimean occupation and that it was carried out by these men in green without insignia.  There has also been military equipment around the settlement since Feb 27.

As of Friday, children had been kept at home for three days.  Residents of Chongar are outraged at the Russian military presence and have hung Ukrainian flags everywhere in protest.

Legal experts have conflicting views as to whether use of military personnel without identifying insignia falls within Article 4 of the Geneva Convention.  Military intervention without a declaration of war does not, and Putin is not even deceiving his own increasingly propaganda-fed population, let alone Ukraine and the world.

The sign warns that the area is a minefield

International military observers were prevented from entering the Crimea for the third time on Saturday.  The BBC reported that the Crimea is in the control of “pro-Russian forces”.

Even without their Russian military vehicles and equipment, the term would be dangerously misleading.  Who are they if not Russian forces, and why are they in control of Russian equipment?

The analogies often drawn with the conflict over South-Abkhazia in 2008 are unfortunate.  The supposed election of a new “pro-Russian” Crimean Prime Minister, Sergei Aksenov took place on Feb 27 in a parliament surrounded by armed gunmen.  Aksenov’s Russian Unity party had won only 4% of the votes in the last parliamentary elections and had a mere 3 MPs.  This new “government” has now voted, behind closed doors, to join Russia and to hold something it claims to be a referendum on March 16.  The voting paper gives only two options, neither of which involves retaining the status quo.  No information is available as to the financing for this purported referendum, nor about the minimum turnout required nor who will check the ballot papers.  Reports in the media on Saturday suggested that a number of papers considerably in excess of the number of residents able to vote had been printed.

Any attempts to present the Russian role in the Crimea as being one of support for a local pro-Russian government fly in the face of all the facts.  Ukraine’s closest neighbours – Poland and the Baltic States – have every reason to feel threatened.  So should we all if the Budapest Memorandum which guaranteed Ukraine’s territorial integrity in exchange for giving up its nuclear weapons is so overtly ignored.

More photos, as well as an interview (in Russian) can be found in Kherson News and Novaya Gazeta 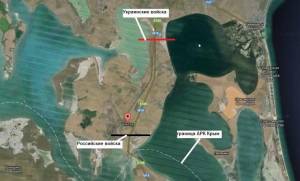