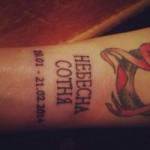 Three young women – Ukrainsky Tyzhden journalist Olena Maksymentko and two activists – Kateryna Butko and Oleksandra Ryazantseva – were seized on Sunday trying to enter the Crimea from the Kherson oblast.   The information originally came from a Glavkom journalist who was also detained.  His money was stolen, however he was released.  He reports that the women were stopped by unidentified individuals in “military uniform of the Russian army”.  During the search, the men discovered that one of the women had the words “Nebesna Sotnya”[normally translated as the Heavenly Hundred] tattooed on her arm in memory of those killed, mainly by Berkut snipers, in February  The term "sotnya" refers to a cossack unit but the individual took its usual meaning - one hundred - and threatened that there would soon be 102.

The Glavkom journalist reports that the women were first forced to kneel down, then taken away somewhere.

Later in the evening, an employee of the Ombudsperson’s Secretariat reported that the women were being taken to the Sevastopol SBU [Security Service] and that they had been detained by the Sevastopol Berkut and passed to the SBU.