For your freedom and ours! Russians demand troop withdrawal from Crimea

For your freedom and ours! (photo: Grani.ru)

For your freedom and ours!

Tens of thousands joined a march and rally in Moscow against Russia’s military aggression against Ukraine and effective occupation of the Crimea.  The rally was addressed by prominent writers, musicians, academics.

At the end of the rally, an agreed list of demands was read out.  The protesters called for Russia to withdraw its troops from the Crimea and to stop interfering in Ukraine’s affairs.

Demonstrations have been taking place in other Russian cities including St Petersburg and Yekaterinburg.

At the rally in Moscow, Professor Marietta Chudakova, addressed her words to Ukraine:  “Ukraine… look at these faces!  Honest and intelligent people of Russia have gathered here.  Ukraine, we are with you!”

As reported, an appeal signed by over 90 prominent Russian artists, musicians and academics states:

“Our country has been drawn into the most dangerous of gambles. Under the slogan “We will defend Russians in the Crimea, and also all Ukrainians from the new illegitimate fascist regime in Ukraine!” , the effective annexation of the Crimea has already taken place. International law has been flagrantly infringed, together with the principles of European security and stability. Russia is rapidly sliding towards a new cold war with the West, the grave consequences of which are impossible to predict.

There are unrestrained torrents of lies and disinformation in all Russian state media, while a deafening propaganda campaign has been launched against all who try to question the actions of the authorities and point out their disastrous consequences for the country and for the people. All who disagree with the official line are subjected to wholesale defamation, get called a “fifth column” and “fascists”.  And there are plenty of dissenting voices. You only need to read the media which is not subject to censorship and the numerous views expressed on social networks to see that political analysts; economists; people professionally involved in foreign police; as well as simply people with some degree of social sensitivity are warning that Russia is moving towards a real catastrophe – economic, political and humanitarian.” 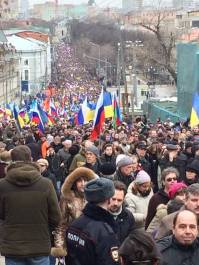