Crimean “self-defence” against one fearless elderly ladyUkrainian Greek-Catholic priest in Sevastopol abducted .. by police (update)Another activist disappears in CrimeaAbducted activist Andriy Shchekun removed for “subversive activities”More abductions in the Crimea (updated)Urgent Appeal from residents of the CrimeaRussian troops already deployed in mainland UkraineThe Crimea is our Home: Get your troops out!Crimean "referendum" a grotesque farceCrimean Tatars call on all Crimeans to boycott "referendum"Avoiding Ukraine’s language minefieldsChief Rabbi and others dismiss Putin’s “anti-Semitic extremist” claimsRussian propaganda must be challengedWestern Media: Don’t distort the situation in Ukraine!Russia’s aggression poses dangers beyond Ukraine’s bordersCrimea: Anti-Semitic card and other provocation in time of siegeMr Putin: We ethnic Russians and Russian speakers don’t need protectionDangerously orchestrated Crimean exerciseRussia claims threat to its interests and life of Russian nationals in UkraineBlood and Berkut Sniper Bullets on the President’s Hands
• Topics / Politics and human rights 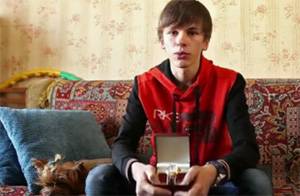 16-year-old Andriy Senko from Kyiv has publicly returned the expensive watch he was once personally given by Russian president Vladimir Putin who said then that he wanted everybody to live in peace.

Back in 2004, when Andriy was in the first grade, his question regarding what he dreamed of was deemed one of the most interesting to be put to Putin, who was visiting Ukraine to commemorate the 60th anniversary of the liberation of Ukraine from the Nazi invaders.  Six-year-old Andriy wrote that his dream was that all children and their parents would live in peace.

There was a televised meeting with Putin and the then president, Leonid Kuchma.  Andriy explains on the phone that Kuchma gave him a laptop, and Putin a watch.  The latter was too big for him, and they decided that he would begin wearing it when he turned 16.

Andriy turned 16 on Feb 5 this year and received the internal passport of a Ukrainian citizen one month later. He explains that he will not be able to wear the watch and is returning it.

Vladimir Vladimirovich, I am addressing you personally. From childhood I was raised to love my country, Ukraine, and its people. I’m a peaceful person but if necessary, I am ready to go and defend peace on our land. I remember your words about your dreams. You said that you wanted everybody to be happy and live in peace. But you lied and if only for that reason, I must return your present. And if I had the chance to meet with you again, I would tell you to your face: Vladimir Vladimirovich, you are a liar."

The video can be seen here https://youtube.com/watch?v=gyCLKtLQCrU

Andriy is seen with his grandfather who volunteered as a 17-year-old and fought the Nazis and with his father, a journalist who was born in Moscow, though has lived all his life in Kyiv.