The activists gunned down by police snipers 40 days ago were remembered throughout Ukraine on Sunday, while a new report presented evidence that Yanukovych’s regime was behind the killings carried out by Russian-trained Alpha unit snipers.

Sunday was the fortieth day since the gunning down of activists in Kyiv began, and throughout Ukraine people gathered to remember the slain. In Moscow three activists who held single-person pickets in memory of those murdered by Berkut snipers were detained. The website OVD-Info reports that the three were Sergei Yakovlev; Dmitry Zvorkin and Mark Galperin.

The three say that they came out onto Tverskaya St with portraits of some of the slain protesters in their hands and kept a distance of 50 metres between them.  They were therefore not accused by the police of infringing the rules for single-person pickets, but were detained “in connection with the unstable situation” in the country for a talk.  Two of the three are reported to have had their passports taken away.

The killing began earlier, with the first two victims – Serhiy Nihoyan and Mikhail Zhyzvevsky – shot dead on Jan 22.  Yury Verbytsky, a 52-year-old seismologist died of horrific injuries after being abducted from hospital together with journalist and activist Ihor Lutsenko.  The testimony of the latter and other people abducted from hospital who were later found in police stations gave weight to the rumours that the regime was using death squads against the Maidan protests.

It became clear as early as Tuesday morning, Feb 18, that snipers were being deployed against unarmed protesters.  If at the beginning, rubber bullets were used, this very soon changed, and the snipers not only used real bullets, but shot to kill, aiming at the head, neck or heart.  This can be clearly seen on the many videos available on the Internet.  They explain why after the worst day on which 53 unarmed protesters were killed, on Friday Feb 21, when an agreement was brokered with Viktor Yanukovych which would have allowed him to remain in office up till December 2014, the message from Maidan was clear. Yanukovych was given until 10 am on Saturday to resign.  He fled, emerging a few days later in Russia.

Over the last few weeks, the Kremlin and Russian propaganda machine have tried to push the idea that the snipers were organized by activists to discredit the regime.  Sergei Lavrov, Russia’s Foreign Minister on Sunday claimed, for example, that Pravy Sector, the right-wing movement that took part in the Maidan protests, was responsible for the killings.  That these are monstrous lies is  demonstrated in an article just published by the Daily Beast which writes that: “The unique photographs and 90 gigabytes of video material shared with The Daily Beast provide strong evidence that the massacre in the Maidan was in fact a vicious and clinical assault ordered by the pro-Russian Yanukovych regime and executed by its arch loyalists. But that has not prevented the Kremlin from attempting to orchestrate its own narrative of events.”

Please read (and circulate!) the article and photos here: http://thedailybeast.com/articles/2014/03/30/exclusive-photographs-expose-russian-trained-killers-in-kiev.html

Ukraine’s new Interior Minister Arsen Avakov stated on Sunday that some people have been detained over the killings. He promised that on Thursday an interim report from his ministry, the SBU [security service] and Prosecutor General’s Office, would provide more information about findings to date. 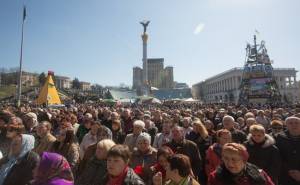