Olaolu Femi’s surreal difficulties continueOlaolu Femi finally released from custody17 months on Olaolu Femi trial delayed for want of an interpreterProsecutor accused of corruption over Olaolu Femi casePeaceful protest in support of imprisoned Nigerian student stoppedQuestionable “witness” in the Olaola Femi trialThe Olaola Femi Case: Free Hand to Skinheads?One year on, still imprisoned for defending himselfSelf-Defence is No Offence!It’s criminals who should be in prison, not their victims!Nigerian held in detention for 6 months after being attackedTwo suspects in Luhansk racist attack caught in RussiaAlleged organizer of Luhansk attack on foreign students released from custodyLuhansk: Continuing run-ins between local residents and foreign nationalsLuhansk: Masked gang beat up foreign studentsFeminists, “Railroad Partisans” and School-Leavers Protest. A Digest of Protests in Russia, 25 June-2 July 2022 Ukrainian sentenced to life for racist and homophobic attacksNigerian student among latest to be abducted by militantsMan arrested over attacks on Nigerian studentsTwo vicious attacks on Nigerian students
• Topics / The right to a fair trial 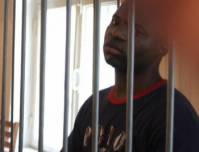 The verdict passed on April 1 in the trial of Nigerian student Olaolu Femi could have been worse, but should have been better.  The former student of Luhansk Medical University received a five year suspended sentence with a three year probation period.  Femi has apparently said that he will be appealing against the conviction for attempted murder.  What is much more disturbing is that a spokesperson for the Luhansk prosecutor’s office, Olha Dyachenko has told journalists that the prosecutor “will also appeal against the sentence since they had asked the court to imprison him [Olaolu Femi] for 11 years due to the gravity of the deed committed”.

Femi was returning to his flat in Luhansk on Nov 5, 2011 together with a friend.   The two young men were set upon by 5 people who hurled racist abuse, and  knocked them to the ground.

Femi managed to get to his feet and grabbed a broken bottle in an attempt to defend himself. He lashed out and hit his assailants. Three young men – V. Haman, D. Lemenchuk and A. Loboda received cuts to the arms, neck and head, while Iryna Pashkova who also took part in the incident was hit on the face and head.  Femi was arrested 12 hours later and spent almost 18 months in SIZO [remand prison] charged with attempted murder.

There were appalling irregularities in the case from the outset.  Femi was interrogated without a professional interpreter present and could not understand the people who were brought in as English speakers.  He had good reason for fearing that they in turn were not conveying his explanations accurately.  All of the documentation was in Russian which Femi does not know well. The prosecutor claimed that he was given verbal translations, but there was no indication of who this supposed translator was, and finally Femi simply refused to sign the documents.

The number of alleged victims suddenly decreased, and the court showed no interest in forensic evidence which found that Femi was not, as claimed, inebriated, but that the five young people were.

The case gained considerable publicity both in Ukraine and abroad.  Perhaps for that reason efforts were made to improve the prosecution’s case and a year after the event, a “witness” was pulled in.  The man in question was presented as the taxi driver who drove the two young men.   The taxi driver - Denis Yevteyev could provide no information about when he had left the taxi firm in question for whom he supposedly freelanced, without any mention in his work record.  He stated that he had collected three or four “Africans” from the medical institute and couldn’t say definitely that the accused and the main witness were among them, since they all look the same to him.  He claims, however, that he remembers the events of that evening very well because his passengers were aggressive and noisy. He claimed that there was a strong smell of alcohol and that the passenger in the front kept gesticulating, making it hard for him to drive. He was unable to explain what this “aggression” consisted of and who it was directed at.  Both Femi and his friend testified that they had never set eyes on the man before.

The publicity and a campaign by some human rights groups finally prompted the Ombudsperson, Valeria Lutkovska, to intercede on Femi’s behalf and he was released from SIZO on April 17, 2013.

Ukraine’s acquittal rate fell over the last few years to near zero and the response from the prosecutor is, sadly, typical.  It remains deeply frustrating since even without the procedural irregularities, the case could only arouse the strongest concern.  Five people had set upon 2 young men, and one had defended himself.  None of the injuries had been severe, and the only person to be punished as the result of a racist attack was the victim – Olaolu Femi.