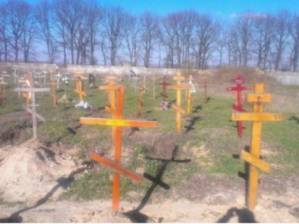 The Search Initiative Group searching for traces of people missing since the EuroMaidan protests have had no response from the police regarding unmarked graves found in Brovary (near Kyiv).

Radio Svoboda reports Taras Matviyiv and Tetyana Slobodyan as saying that they have received no response after notifying the police of graves freshly dug, with old crosses and no names at the Brovary cemetery.  They say that they have also had no response to requests for information from deputies regarding Brovary and some other places.

The activists can only identify graves which arouse questions, but it is for the police to decide whether further investigation is needed.

Matviyiv says that a week and a half ago, members of a Maidan Self-Defence unit came to the cemetery.  As soon as they arrived, five police vans and around 20 officiers appeared.  They prevented the Maidan activists from doing anything and pushed them out of the cemetery.  Since the people were unarmed, without balaclavas and didn’t even have spades with them, this speedy response from the police seems at least strange.

The Search Initiative Group are looking for 126 people who have been missing since the events on Maidan.