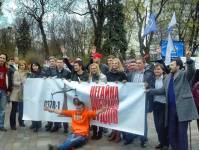 Demonstration in support of the draft bill on Tuesday

A victory was achieved on Tuesday with the adoption by parliament of draft Law No. 4378-1.  This law proposes mechanisms for investigating the adoption by judges of politically motivated rulings against peaceful protesters.  Most crucially, it will lead to a totally new makeup of judicial bodies which were gravely compromised under the Yanukovych regime.

Viktor Yanukovych and his aides set about bringing the judiciary to heel within months of his election in February 2010.  One of the methods was the increased – and unconstitutional - powers of the High Council of Justice [HCJ] which was increasingly used to put pressure and / or dismiss judges whose rulings were not to the liking of those in power.   Another was the appointment to administrative posts within the courts of judges effectively selected by the president’s administration according to criteria which had nothing to do with ensuring rule of law.

As reported on many occasions, this led to serious degradation of the judiciary with judges under heavy pressure, to which many succumbed, to pass the rulings required by the prosecutor regardless of the merits of a case.  The result was most widely publicized due to the politically motivated prosecutions of opposition politicians, in particular Yulia Tymoshenko and Yury Lutsenko.  The rot was just as evident in the trial of the three young men, the first of whom was taken into custody the morning after Yanukovych demanded arrests within the week for the 2010 bomb blast in a Zaporizhya Church.  Despite compelling grounds for declaring a mistrial and absolutely no evidence against the three except multiple and contradictory “confessions”, the three were sentenced to 13 and 14 years.  A telling indicator of the state Ukraine’s judiciary had reached can be seen in the fact that by 2012 the acquittal rate in Ukraine had fallen to almost zero.

More details can be found here, but in brief, the law proposes to create a special commission which will have one year to carry out checks of general jurisdiction court judges.  The checks will concern the very many cases where a judge either alone, or as part of a panel of judges, passed rulings during the EuroMaidan protests which restricted the right to peaceful assembly; remanded people in custody, upheld such orders or prolonged periods of detention; or other punitive measures against protesters.  They will also include cases where people now declared political prisoners were convicted for actions linked with their political or civic activities; where illicit surveillance orders were issued against civic activists and where violations were found by the European Court of Human Rights.

The special commission will be attached to the High Council of Justice, and empowered only to report its findings to the latter. It is therefore of crucial importance that the makeup of both the HCJ and  High Qualification Commission of Judges will be totally changed, with important restrictions on eligibility.  All heads, their deputies and the secretaries of the court chambers of high specialized courts and of courts of appeal are dismissed from their administrative posts, as well as the heads of local courts and their deputies.

The measures may appear draconian, but selective dismissals would be worse and the judicial bodies mentioned were seriously compromised.  The dismissals as per this law are all from administrative posts, with the judges involved still able to practise as judges.  Any decision that a judge acted in breach of their oath must be made by the HCJ.

There remain serious reservations about the law, as well as new concerns following the separatist protests in eastern oblasts over the last few days.  The "foreign interference" involved in these disturbances, as well as the fact that those involved are often paid for such services, have been noted by, among others, the US State Department.  Accusations of political bias if cases arising over these acts are not treated as politically motivated are predictable.  It seems likely that certain key similarities are deliberate so as to allow for such comparisons.  The problems are certainly there, yet reservations are muted by awareness that measures are needed.  Efforts have also been made to ensure that judges’ rights are not infringed, although how successful these are remains to be seen.

That many judges are less than happy about the moves afoot became abundantly clear over the last week with the attempt to bring forward a Congress of Judges to April 7.   It seemed obvious that the main motive for this change and for the sabotage of a Council of Judges meeting scheduled for last weekend was to make appointments using the Congress’ quota to the judicial bodies before any overhaul, and then stall attempts to vote in new people. As reported, the Congress was prevented by around 150 Maidan protesters. The methods may have been unorthodox, however the head of the Council of Judges, Vasyl Onopenko had already stated that the planned Congress was illegitimate, as would be any decisions it adopted.

The bill could in theory be vetoed by interim president, Oleksandr Turchynov, but this is not expected.  What can, however, be anticipated are other strenuous attempts to sabotage the law’s enforcement, and while this is an important victory, it is still only the beginning.