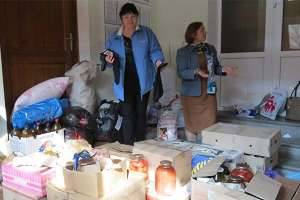 At a time of the gravest danger Ukraine has faced since independence, the role of the armed forces cannot be underestimated.  It is therefore of the greatest concern that the Ukrainian soldiers on the border between Kherson oblast and the Crimea have been left without the most basic necessities.  Tatyana Kulik writes in the Kherson newspaper Vgoru about those Kherson residents who have stepped in to help.

The most active helpers of the army, she writes, have proven to be pensioners. By no means all of them can help with money.  Some therefore bring the Coordination Centre for Aid to the Military [the Coordination Centre] whatever they have put by at home.  One elderly lady brought several bars of soap produced back in Soviet times.  Another brought 500 UAH saved, almost certainly with difficulty – for emergencies.

The Coordination Centre was created three weeks ago by Kherson civic activists and is now manned by volunteers from morning till late in the evening in an office provided by the regional administration.

Tatyana Kulik met with four volunteers: Larisa Olenkovska, a lecturer from the Kherson University; Yelena Korotetska, a businesswoman; Stanislav Manchevsky, a programmer; and Yelena Pevneva who had just arrived for her shift.

Larisa Olenkovska explained that the activists decided to form the Centre after travelling to the Crimea on March 8.  A group made up mainly of women set off in four cars loaded with food items for the military units in the Crimea. They realized immediately that a one-off trip was quite simply not enough and that the men needed absolutely everything, from sleeping bags to kitchen gear.  People were arriving at the regional administration everyday with money, food items and other things.  The first problem was finding a place to keep it all.  They also needed a system enabling them to provide soldiers with what they required most of all, and that ensured that people knew that the money collected was really going to help the military.

They met together with Natalya Bimbraite from the Kherson Regional Charity and Health Foundation; Angela Litvinenko from the Successful Woman Centre in the region; and with businesswomen Halyna Umanets and Olha Podhaiska.

They decided that a centre was needed with everything transparent and checkable, where people could get reliable information and contact details for military units.  While some of the activists began working on establishing contact with the military units and ascertaining their most immediate needs, others began travelling to Chongar near the border and contacting village councils, district administrations etc.

The amount of work increased by the day and they soon decided to create the Coordination Centre for Aid to the Military and opened a bank account for donations. They have a Supervisory Council made up of civic activists, journalists, members of the regional administration, deputies and military personnel.  After discussion, the Council asked the Kherson Regional Charity and Health Foundation to open a special account.  The Foundation was chosen because it is one of the most long established NGOs in Kherson and has totally transparent accounting which can be checked on the websites: www.vgoru.org и www.oda.kherson.ua

The Coordination Centre finds out what is needed, after which the Supervisory Council meets to decide what should be bought in the first instance , after which money is used from the account.

As far as what is needed, the situation could not be more dramatic.  The military servicemen were brought to the Kherson oblast without anything: proper bedding, warm clothes; food. People bring what they can – tins of food; mattresses, cushions; blankets; warm socks.  Many pensioners don’t want to give their names. They give money and simply leave.

The activists were asked if there had been any unusual donations. They mention one elderly man who from the very first day has been bringing them bags of old things – shoes, a fur coat from his youth so that the soldiers have something to lie on.  Everything so old that it’s falling apart, but his effort to help is immensely moving.

One of the things needed that might not come to mind is firewood. The area where the soldiers are positioned is steppe land, without forests. The lads have to stand on duty with a vicious wind blowing.

Men from the area have also become involved, helping with technical equipment, transport etc.  A lot of businesspeople who are travelling in that direction come to the Centre, offer to transport goods.

Priests from all confessions are constantly travelling to the units, providing spiritual and also moral support, bringing the men information, newspapers to read.

There has been enormous support from everybody.  One woman, Natalya Stepanova collected food products in her district and has twice brought three tonnes of food. Some businesspeople bring goods in box-loads, others are forced by circumstances to make more modest offerings, a packet of macaroni, a jar of jam, toilet paper.

There are also a lot of letters with people telling the soldiers that they’re proud of them, that they feel fortunate to be Ukrainians.  They receive phone calls, from elderly men who went through the War, remember the bombing, the hunger, speak of the horror of it all. They’re worried for their sons and grandsons.

What is the Defence Ministry doing in all of this?

The Coordination Centre is simply unable to provide either bread or water in the quantities needed.  While local bakeries could provide small amounts, once the number of servicemen increased, they could not cope.  Nor, of course, should they have to.  The ministry has long been advertising a number which people can ring to donate to the armed forces.  People have responded generously and there is apparently now over 80 million UAH at the 565 number on all the advertisements. The ministry is saying that they can’t take the money out without a tender which could take months. Apparently a bill was passed on Tuesday designed to increase supplies to the armed services, however as yet there is no evidence of any real movement from the ministry.  Human rights activists are concerned that the money which the ministry collected be kept under close scrutiny so that it doesn’t later get spent on the dachas and cars of those in high places within the military.

There are men at ground level who could be facing military aggression from Russia any day and they need material and moral support.  The defence ministry must be pushed to move in the right direction, but each individual can also help.

The residents of Kherson have been doing a huge amount, but most are not well-off and nobody’s funds are limitless.  Help is vital.

For those wishing to make a donation in USD