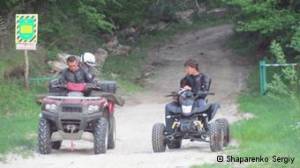 The Verkhovna Rada has passed a law with potentially disastrous consequences for Ukraine’s already ravaged natural environment.  That a draft law waiving the permit procedure needed for activities with impact on the environment was proposed by former president Viktor Yanukovych is no surprise.  Why 270 MPs in post-Yanukovych Ukraine should have adopted this law on April 9 is much more baffling.

Law №2436а introduces amendments to various laws in order to reduce the number of permit documents, making it much easier, for example, to cut down trees and forests for development.

If Acting President Oleksandr Turchynov does not veto the law, then “sanitary tree-felling” in nature reserves will be permitted without agreeing this with the Environment Ministry.  This means, of course, that the ministry will not be overseeing what is being termed “sanitary”.

Oleksiy Vasylyuk, deputy head of the National Ecological Centre of Ukraine [NECU] explains that nature reserves have been the only parts of Ukraine’s reserve land where any economic activities are banned.  Over recent years a cunning system of “sanitary tree-felling” was set up with respect to Ukraine’s forests.  This has resulted in more than half of Ukraine’s forest being felled under the pretext of sanitary or other measures, and then sold.

This law now removes the restriction protecting nature reserves from the same fate.

Other restrictions removed achieve much the same end. Article 57 of the Forest Code would now exclude the requirement to agree the change in the designated purpose of forest land with environmental bodies.

Even more sinister is the removal from Article 61 in the same Code of the requirement that the Environment Ministry agrees and stipulates where enterprises and other structures with detrimental impact on forests are placed. The demand that such enterprises, etc. undergo an environmental impact assessment is also removed.   There would also be no need for Environment Ministry assessments where forest sites are used for mining, placing cables and other work.

Vasylyuk believes that the fact that a law proposed by Yanukovych has still been adopted shows the lobbying efforts of Viktor Sivets, the former head of the State Forestry Agency.  He is notorious for being against reserves and for having established the system of “sanitary tree-felling”, and other activities which environmental protection of the forests hampers.

Yaroslav Movchan, head of NECU is blunt: adoption of this law is sabotage by MPs and the Verkhovna Rada office of the demands of Maidan. If it comes into force, it will have disastrous consequences for the environment.  He stresses that the law must be vetoed, along with some other bills tabled by (presidential candidate) Serhiy Tihipko and Yury Miroshnichenko, Yanukovych’s former representative in the Verkhovna Rada.