EuroMaidan SOS: On the events in the East and South of UkraineDangerous Security Service manoeuvres in LuhanskKremlin-orchestrated "federalist" protest and western inactionDonetsk Front in Putin’s Dirty WarScurrilous rumours used to spread fear and distrust in Eastern oblastsAutoMaidan activist shot at near ChongarRussian troops already deployed in mainland UkraineThe Crimea is our Home: Get your troops out!Crimean "referendum" a grotesque farceCrimean Tatars call on all Crimeans to boycott "referendum"Avoiding Ukraine’s language minefieldsChief Rabbi and others dismiss Putin’s “anti-Semitic extremist” claimsRussian propaganda must be challengedWestern Media: Don’t distort the situation in Ukraine!Russia’s aggression poses dangers beyond Ukraine’s bordersCrimea: Anti-Semitic card and other provocation in time of siegeMr Putin: We ethnic Russians and Russian speakers don’t need protectionDangerously orchestrated Crimean exerciseRussia claims threat to its interests and life of Russian nationals in UkraineBlood and Berkut Sniper Bullets on the President’s Hands
• Topics / Politics and human rights

On Moscow’s burning wish to defend rights in Ukraine, not in Russia 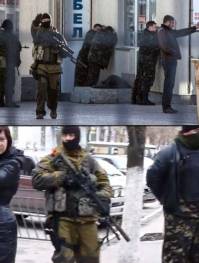 The top picture was taken when Russian forces seized control in the Crimea , the bottom at Slovyansk on April 12.  Liga.net asserts that only Russian enforcement agencies use such weapons

As evidence mounts of direct Russian involvement in the so-called separatist troubles in eastern Ukraine, Moscow has tried two cards which should stretch the credulity of even its brainwashed internal audience.

Ukraine’s former president, Viktor Yanukovych has again been pulled out of deep freeze to plug the idea that Ukraine is on the verge of civil war and to call on the police and security service [SBU] to not open fire against heavily armed pro-Russian protesters in Slovyansk and other cities in the Donetsk oblast.  A hardly convincing line from Yanukovych, his interior minister Vitaly Zakharchenko, and prosecutor general, Viktor Pshonka, who are wanted on charges in Ukraine over the gunning down of unarmed protesters and other crimes.  Any western country would be likely to extradite them to stand trial which is clearly why they scarpered to Russia.

As on previous occasions, Yanukovych parroted all of Russia’s demands - a referendum, federalization, non-allied status, as well as the Russian propaganda narrative about the “Kyiv clique” in power. He also warned of criminal liability for those who carry out Kyiv’s order.  Many of Yanukovych’s former yes-men in the Donetsk region are probably wavering at present, trying to decide who’s likely to win.  This almost certainly explains the pathetically inadequate statements thus far from billionaire Renat Akhmetov who has considerable influence in the Donetsk region, as well as the fact that some of those in top positions in the regions now under siege have clearly aided the insurgents.

The persistent rumours of Yanukovych’s death do appear to be exaggerated, presumably because of the value to be had for Russia of presenting him as Ukraine’s president.  As such, he conveniently repeats all the elements of the Kremlin’s scenario, including the accusations of “double standards”.

The accusations are, in fact, absurd since none of the look-alike barricades and other props can hide absolutely fundamental differences.  The Yanukovych regime was almost certainly deterred from a full military operation against the EuroMaidan protesters by the vast numbers of peaceful protesters and likelihood of failure.  The original seizures of regional administrations in Donetsk, Luhansk and Kharkiv were the work of around 50 people with demonstrations of around 2 thousand. There is plenty of evidence that some at least were paid for their “services”.  The events on April 12 and 13 involved armed and clearly trained men, carrying out synchronized operations.  Most damningly, as pointed out by US Ambassador to Ukraine, Geoffrey Pyatt: “Militants in eastern Ukraine were equipped with Russian weapons and the same uniforms as those worn by Russian forces that invaded Crimea”.

Russia would be well-advised to avoid accusations of double standards for another reason.  In a statement on Sunday, Russia’s foreign ministry claimed that:

“The Kyiv government, self-proclaimed after a State coup, has set itself on course for the violent crushing of popular protests which came as reaction to the total disregard for the legitimate interests of residents of the south-eastern regions, direct threats and violence against those who don’t agree with the dominance of radical nationalists; chauvinist, Russophobic, anti-Semitic actions of the coalition which came to power in Kyiv with the direct support of the USA and EU”.

Over the last decade the European Court of Human Rights has repeatedly found that Russian federal troops were responsible for executions, torture and enforced disappearances in Chechnya and Ingushetia. In four judgements issued in February 2010, for example,  Strasbourg found Russia liable for the disappearances and deaths of 11 civilians detained or killed by Russian forces in Chechnya and Dagestan between 2000 and 2005.

There is considerable evidence, including an independent investigation by explosives expert Yury Savelyev, to suggest that the explosion used to justify the storming of School No. 1 in Beslan (North Ossetia) on Sep 3, 2004, did not come from within the school as claimed.  It was during the use by federal forces of tanks and heavy artillery that almost all of the 331 victims, over half of them children, died.

Even the uncharitable thought that the Kremlin might view only ethnic Russians as worthy of its “protection” cannot explain Moscow’s burning need to defend the interests of ethnic Russians and Russian-speakers in another country when it shows such contempt for human life much closer to home.

The families of 95 victims of the 2002 Nord Ost hostage crisis in Moscow have again turned to the European Court of Human Rights over the lack of a proper investigation into why most of the victims died because of the use by the authorities of an unknown gas.  The Court has already found Russia in breach of its positive obligation to protect the right to life through its failure to minimize the effect of the gas on the hostages by evacuating them as rapidly as possible and providing them with the necessary medical care.”

The examples are legion, and would strengthen the belief that Russia’s narrative about “protecting” its own is a ploy to conceal its real motives were any doubts still possible.  They are not and the West’s failure now to translate threats of “serious consequences” into real action will place more than just one sovereign nation in jeopardy.