EAJC: Russia is still trying to use claims of anti-Semitism to hide its aggression 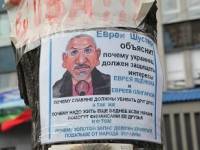 The Euro-Asiatic Jewish Congress notes that on April 13 the Russian Foreign Ministry claimed, among other things, the following:

“The unfolding situation in the South-East of Ukraine is becoming extremely dangerous. The Kyiv government, self-proclaimed after a State coup, has set itself on course for the violent crushing of popular protests which came as reaction to the total disregard for the legitimate interests of residents of the south-eastern regions, direct threats and violence against those who don’t agree with the dominance of radical nationalists; chauvinist, Russophobic, anti-Semitic actions of the coalition which came to power in Kyiv with the direct support of the USA and EU”.

At the present time heavily armed separatist gangs are active in Ukraine, seizing administrative buildings and terrorizing the civilian population. The planned coordination of their actions; the level of their training; their uniforms and weapons  force us to presume that we are dealing with members of Russian military special units.  There is reliable information about numerous cases where Russian nationals have taken part in these events. Moreover, among the “activists” of these terrorist gangs Russian officials have been identified who took part in Russia’s aggression against Georgia in 2008. We can therefore say with certainty that the Russian armed expansion onto Ukraine’s territory which began with the occupation of the Crimea is continuing into the south-eastern regions of the country.

At the same time, in its statement the Russian Foreign Ministry calls this large-scale aggression “protests as a reaction to violence against all who disagree with the anti-Semitic actions of the coalition which has taken over in Kyiv”.

We recall that Ukrainian Jewish leaders and activists wrote to Vladimir Putin a month and a half ago when the “Jewish question” began being systematically used by the Kremlin as justification for its interference in Ukraine’s internal affairs.

“Stability in our country is in jeopardy, and the threat is coming from the Russian government, that is, from you.. It is your policy of inciting separatism and crude pressure placed on Ukraine that threatens us and all Ukrainian people, including those who live in Crimea and the Ukrainian South-East. South-eastern Ukrainians will soon see that for themselves.

Vladimir Vladimirovich, we […] do not wish to be “defended” by sundering Ukraine and annexing its territory. We decisively call for you not to intervene in internal Ukrainian affairs, to return the Russian armed forces to their normal fixed peacetime location, and to stop encouraging pro-Russian separatism”.

At the session of the executive committee of the World Jewish Congress two weeks ago, a resolution was passed which stated that “the WJC executive committee recognizes the assurances and the actions of the new Ukrainian government with respect to protection of Jews and Jewish life in Ukraine” and “calls on all governments, media, NGOs and their members to not exacerbate an already difficult situation through unwarranted accusations or exaggerated stories about the situation for Ukrainian Jews.”