On Moscow’s burning wish to defend rights in Ukraine, not in RussiaEuroMaidan SOS: On the events in the East and South of UkraineDangerous Security Service manoeuvres in LuhanskKremlin-orchestrated "federalist" protest and western inactionDonetsk Front in Putin’s Dirty WarScurrilous rumours used to spread fear and distrust in Eastern oblastsAutoMaidan activist shot at near ChongarRussian troops already deployed in mainland UkraineThe Crimea is our Home: Get your troops out!Crimean "referendum" a grotesque farceCrimean Tatars call on all Crimeans to boycott "referendum"Avoiding Ukraine’s language minefieldsChief Rabbi and others dismiss Putin’s “anti-Semitic extremist” claimsRussian propaganda must be challengedWestern Media: Don’t distort the situation in Ukraine!Russia’s aggression poses dangers beyond Ukraine’s bordersCrimea: Anti-Semitic card and other provocation in time of siegeMr Putin: We ethnic Russians and Russian speakers don’t need protectionDangerously orchestrated Crimean exerciseRussia claims threat to its interests and life of Russian nationals in Ukraine
• Topics / Politics and human rights

Co-founder of the social network VKontakte, Pavel Durov has reported that Russia’s Security Service demanded that he provide personal data about the organizers of the EuroMaidan groups on the network.  He writes on his page on VKontakte

“In the process I had to sacrifice a lot. I sold my share in VKontakte, for example, since having it could prevent me from making correct decisions. However I don’t regret anything – protecting people’s personal details is worth that and much more. Since December 2013 I haven’t had any property, but I’m remained with something much more important – a clear conscience and ideals which I’m ready to defend.”.

Unless, of course, the information request is not genuine, then Russia’s Security Service was demanding information it had no right to, presumably in order to obtain more such information.> 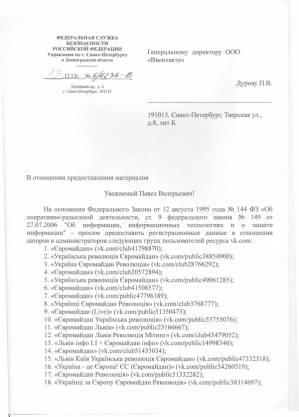 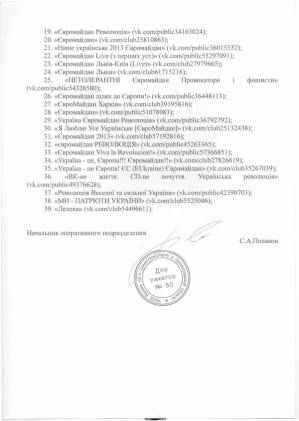