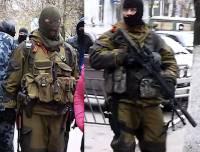 The Ukrainian authorities may have suspended anti-terrorist operations over Easter, but there is no let-up in violence and aggression from the pro-Russian militants in east Ukraine. In Slovyansk there have been reports of attacks on Roma and threats against Ukrainian-speakers.  It’s not safe there for journalists either, while the prominent stand in countering the so-called separatists by Ihor Kolomoisky, now Governor of Dnipropetrovsk has also aroused anti-Semitic diatribes from Russia’s fans.

Donbass News reported on Saturday that attacks were being carried out against Roma.  The website cited witnesses as saying that armed men with rifles have burst into and robbed the homes of Roma people.  They are reported to have beaten people, including women and children and claim to be acting on the instructions of the self-styled “people’s mayor”, Viacheslav Ponomorev.  The witnesses said that the plundered property was then taken away in trucks.

This brief text has been widely reported in the media without any effort to supplement the meager report. According to a representative of the Roma Council of Ukraine, there was an attack, although there is no actual proof that the assailants were "separatists".  Both the Roma Council and the International Renaissance Foundation have issued statements of outrage.

A specific type of “mayor”

Russian propaganda channels have doubtless said only good things about Ponomarev and other self-proclaimed mayors.  It is likely that they have avoided showing video footage of him for reasons that will become clear from the following video (he’s the man trying to speak).  https://youtube.com/watch?v=DDhEPpsFX7I

According to a local resident and civic activist who prefers not to give his name since somebody needs to stay and report what is happening, Ponomarev, a former Afghanistan veteran, has gained notoriety in the city. His drug addiction may now be a thing of the past, although on the video he certainly looks at least drunk.

He is reported to have asked local residents to report to the “people’s guard” any suspicious individuals, “particularly those speaking Ukrainian”.  And banned the Batkivshchyna, Udar and VO Svoboda political parties and any campaigning for them

Ponomarev also announced that the first session of what he termed the city council would take place on April 22.  There would be a “referendum”, he said, on May 11 about federalization and the Russian language

As well as political parties which don’t share their views, Ukrainian speakers and the Roma, the pro-Russian militants are also reported to be extremely aggressive towards journalists. The head of the Slovyansk branch of the National Union of Journalists and chief editor of Slovyansk News, Oleh Zontov says that journalists are being forced out of the city. He has been attacked, as has another journalist, Roman Huba, who is also leaving.  It has become dangerous to appear on the streets with a video recorder or camera.  “The city has come under an information blockade”.

It should be noted that journalists, especially from Ukrainian language or western media, have generally found it difficult to work in areas under pro-Russian militant control.

If the Kremlin wanted their claim to be defending Russian speakers against the “anti-Semites” from Maidan to be convincing, they should have tried a bit harder with their own protégés,   As well as a fair contingent of primitive thugs using Russian rifles to carry out attacks and robberies, there are also many activists from parties with neo-Nazi leanings and pronounced anti-Semitic views.

Cursor reports that “Slavonic Shield”, a group in favour of Donbas and other regions joining the Russian Federation has come out with anti-Semitic attacks against Boris Filatov, an aide to the new Dnipropetrovsk Governor and billionaire Ihor Kolomoisky, as well as against the latter.  The text, posted on Facebook, is too primitive to be worth repeating, but clearly anti-Semitic.  It was prompted by the announcement of a reward (provided by Kolomoisky) to people who hand in their weapons, as well as one for “each “little green man” [armed soldier in camouflage, assumed to be Russian] handed over, this is a mercenary on our shared land and trying to push us into a fratricidal war”.

Cursor notes that the anti-Semites prefer to ignore Filatov’s words about how the Yanukovych clique, having plunged the country into an abyss of hopelessness, are now handing out money stolen from people so as to provoke calls to join another country.  It points out as well that flags of the anti-Semitic group “Chornaya Sotnya” [“Black Hundred”] have been seen on separatist demonstrations in Donbas.  The organization, it says, has supporters among members of the authorities at all levels in Russia.  Other such links are presented by Anton Shekhovtsov, one of the most knowledgeable researchers on far-right movements in Ukraine and Russia.

The west has also opted for a wait and see approach, although Russia’s failure to comply with the Geneva Agreement signed on April 17 seems entirely clear.  There has been no let-up in propaganda, and no surrender of weapons.  As well as extracting an agreement which did not mention the Crimea, Russia has thus gained more time for destabilizing the situation in Ukraine.

It does not seem improbable that the agreement was a ploy, a continuation of the attempts to liken the pro-Russian militants’ actions to EuroMaidan.  Maidan refused to accept an agreement which would have let a president who had unarmed protesters gunned down remain in power for 10 months, and this led to Viktor Yanukovych fleeing.  Now Russia has supposedly shown willingness to cooperate, but the “separatists” refuse to leave. If the Kremlin wanted this comparison to bear scrutiny, it should have looked for a better cast.