Three women were injured during the forced removal of the Ukrainian flag over the premises of the Mejlis on Monday. The flag has now been reinstated but members of the Mejlis have called on all concerned residents of the Crimea to help them protect the building against further attack.

The women were hurt when around 40 men from the so-called Crimean self-defence  burst into the premises of the Mejlis of the Crimean Tatar People in Simferopol.  Although the men did not identify themselves, their actions followed a visit from the police shortly after the flag was raised on April 19 and it is difficult to believe that Monday’s visitation was not sanctioned from above.  The three women - Lilia Muslimova, Press Secretary; Marlena Seitasanova, Chief Accountant of the Crimea Foundation, the NGO which owns the building and Zodiye Saliyeva, concierge – had tried to stop the men. 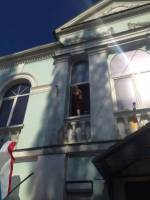 As reported, on Saturday Jemiliev and the current head of the Mejlis, Refat Chubarov, were held at the border into the Crimea by men with rifles who initially claimed that they had been declared persona non grata.  They were finally allowed through, with Jemiliev who had not been in the Crimea since the invasion receiving a warm welcome en route.  It was he who noticed that the Ukrainian flag had been taken down and demanded its restoration.  The building belongs to the Crimea Foundation and is therefore private property which was explained to the police on Saturday.  This doubtless prompted the use of more thuggish methods on Monday.

Violence and intolerance of opposition have become standard in the Crimea and the peninsula’s  newly ensconced leaders give no grounds for optimism.  It seems almost certain that quite shockingly intolerant “tweets” reported by Ukrainska Pravda on Sunday as from the new Crimean “prime minister”, Sergei Aksenov were fakes.  It is disturbing that they did not seem implausible following many other highly questionable statements made by the same man.  Aksenov is from a marginal Russian nationalist party which gained 4% of the votes in the last elections to the Crimean parliament, and only 3 seats in that body.  He himself is widely known by the nickname “goblin” due to criminal connections, and has now gained new prominence as Russia’s choice for frontman to carry out its annexation of the Crimea.  He was supposedly “elected” after armed men in uniform without insignia (but now acknowledged by Vladimir Putin to have been Russians) seized government buildings in Simferopol.