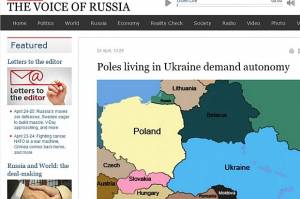 While the EU continues to stall over any serious sanctions, Russia is diversifying its efforts to destabilize Ukraine, with the government radio station Voice of Russia now citing alleged Polish and Hungarian “separatist” sentiments.  The new efforts are worryingly reminiscent of a scandalous suggestion put forward by Vladimir Zhirinovsky, deputy speaker of Russia’s State Duma.

In a letter sent to the governments of Poland, Romania and Hungary in March this year, Zhirinovsky suggested dividing Ukraine up according to the 1939 Nazi-Soviet pact, with Poland “reclaiming” the territory, now Ukraine, which until the invasions by Nazi Germany on Sep 1 1939 and USSR on Sep 17 had been under Polish rule.  The proposal was widely condemned in Poland with Tomasz Nałęcz, presidential adviser on historical issues, calling it the product of a sick mind and suggesting Zhirinovsky needed a psychiatrist.

Not Zhirinovsky alone, it would seem.  The proposal that western Ukrainian regions hold “referendums” on breaking away from Kyiv to join Poland, Hungary or Romania is, of course, much the same as the demand of the pro-Russian militants in the Donetsk and Luhansk regions of eastern Ukraine.  The USA and EU countries have repeatedly pointed to the close connection between Moscow and these armed militants and to a Crimean scenario now being enacted in eastern Ukraine.

Russia has, of course, denied such involvement, and the attempts to branch out and involve other national minorities is probably an attempt to deflect such criticism.

An article has been posted on Voice of Russia entitled “Poles living in Ukraine demand autonomy” . It claims that ethnic Poles are seeking “a referendum in the Zhytomir region to create a Polish autonomy with broad self-governance rights. They also insist that the Polish language be granted the official status along with the Ukrainian language.

The Polish authorities support the idea to unite with their historic homeland. Over the past few years they have been freely handing out Polish passports on Ukrainian territory anyway.

With Warsaw’s approval the Ukrainian Poles started to demand that the authorities in Kiev give back TV broadcasting in Polish, revive the Polish street names in Zhitomir Region and open kindergartens and schools with the Polish language.”

The article claims many sources for its assertions, but names only one -  Albina Noskova, an expert at the Institute for Slavic Studies at the Russian Academy of Sciences.  She speaks of an alleged “love-hate relationship”, going into great detail about the 1943 Volyn Massacre, and then claims that “the numerous visits of Polish politicians to Maidan in Kiev only confirm Warsaw’s desire to add the Ukrainian territories where ethnic Poles live to Poland.”

The latter claim is grotesque. Thousands of Poles, not only politicians, demonstrated their support for Ukrainians during EuroMaidan, and later by providing medical treatment for victims of Berkut snipers.  Selfless support, without any territorial aggrandizement strings attached for which Ukrainians are immensely grateful.

The Polish Gazeta Wyborcza comments that this Russian government controlled radio station was created in Soviet times for propaganda abroad, and although now the government in question is Russia, the station’s profile has clearly not changed. It notes that the station has produced fabricated information which nobody in Poland would take seriously. “Probably for that reason the text is not on the Polish language page of the station, but can be read in English.”

It is cheering that here, as with Zhirinovsky’s outrageous suggestions, Poles are unlikely to take the bait. Nor are their far-right candidates expected to gain any significant number of votes in the European Parliament elections in May.

This is not the case in Hungary and a number of other EU countries where far-right parties which Russia has been cultivating links with are expected to make gains.  The ties between the anti-Semitic far-right Jobbik party in Hungary and the Kremlin are particularly strong and Jobbik representatives were among the far-right and neo-Stalinist figures invited to act as all-approving observers of the so-called referendum on the Crimea’s status in March. These are all parties, it should be stressed, which are antagonistic to the EU and to western democratic traditions altogether.

Note the T-shirt worn by Jobbik MP Tamas Gaudi Nagy during an address berating European democratic values at the Parliamentary Assembly of the Council of Europe.  The caption could have been written by Zhirinovsky, or, of course, by Ribbentrop and Molotov when they were carving up Poland:  “Crimea belongs to Russia; Transcarpathia belongs to Hungary”.

Britain’s Foreign Minister William Hague has claimed that his country is willing to “pay the price” of sanctions against Russia, yet at present is clearly only talking about extending the list of individuals facing visa and financial restrictions.  “More far-reaching measures” will only be applied if Russia begins a formal annexation.  Why should the latter bother, when they can destabilize Ukraine – and Europe – so easily through other means?  The price which we may all have to pay is rising by the day.