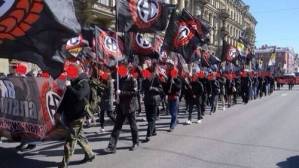 It is undoubtedly correct that the neo-Nazis who marched through many Russian cities on May 1 should not be given a chance to advertise themselves on Russian television, They are however real, unlike the “Ukrainian fascist” spectres used on those very channels to frighten viewers and raise anti-Kyiv sentiments

Cursorinfo reports that Russian nationalists held May First rallies in many Russian cities, including Moscow and St Petersburg.  The list of over 20 cities where such rallies were agreed with the authorities and announced in advance can be found on the “Russians Ethnopolitical Association” website.

The Slavic Union [SS] site states that “On May 1 2014 a procession will be held of Russians, all of those who are willing to proclaim that in Russia there are not only Russian nationals [rossiyanye] , but also ethnic Russians [russkiye] who are proud of being ethnic Russians and are not ashamed to say so.”

Cursorinfo notes that despite Russia’s Law on Extremism, the SS site freely promotes anti-Semitic literature in its section “Revisionism of the Holocaust”.  This asserts that “in order to avoid intellectual terrorism, lies and bias, history, like any other science, requires uninterrupted “revision”. Either it’s a “revisionist” or masked propaganda”.

There is a note from the administrator informing that the site is not on Russian territory and claiming that this means that it can’t be touched.  There is no such disclaimer on the other, equally far-right, site, nor in fact would such arguments have any weight on Russia’s Federal Security Service [FSB] were the latter to feel any concern about organizations openly promoting neo-Nazi ideology.  They appear to show no concern either about their publications or their public rallies.

Both the FSB and Russian courts have already proven willing to prosecute a person over a forum discussion on a Ukrainian website (www.proua.com). Taras Zelenyak, a 36-year-old of Ukrainian origin from Novosibirsk was prosecuted back in 2007 for what Russia’s security service deemed incitement to enmity against Russians.

There are no grounds for concluding that the FSB has since become more liberal in its attitude towards freedom of expression on the Internet. As reported, Roskomnadzor, the Russian federal committee supervising the media and IT just last week blocked access to a number of Siberian websites on which, it claimed, “Ukrainian nationalists have called for mass protest actions in Russia”.  Since mass protests against, say, the Russian annexation of the Crimea have been held without difficulty in all democratic countries, it would be helpful to know what made these mass protests different.  No further information is, unfortunately, forthcoming.   The Russian authorities earlier applied similar measures against the information agency Lenta.ru, www.grani.ru; www.kasparov.ru; www.ej.ru and Alexei Navalny’s blog, all of which publish material critical of the Russian regime. The offensive against Lenta.ru was connected with an interview taken of a member of the Ukrainian nationalist movement, Right Sector.

It is undoubtedly correct that the neo-Nazis striding through Russian cities and declaring their pride at being ethnic Russians should not be given a chance to advertise themselves on Russian television,   They are however real, unlike the “Ukrainian fascist” spectres used to frighten viewers and raise anti-Kyiv sentiments on Rossiya 24; NTV; Russia Today and other TV channels.  It is no accident that the Kremlin-backed pro-Russian militants in Donetsk and Luhansk who have seized television towers do so in order to immediately change the programmes to Russian TV channels. This was exactly the pattern followed in the Crimea after Russia’s intervention on Feb 27.

The effect is being seen in the number of journalists from Ukrainian and western media who have been abducted or attacked.  The two Radio Svoboda journalists attacked in Kharkiv on Thursday were initially abused and called “fascists”.

The confusion would be comical were it not so deliberately promoted and dangerous.  A number of the “Donetsk Republic” pro-Russian activists involved in storming official buildings and proclaiming a “Donetsk People’s Republic” are people with neo-Nazi leanings.  This includes Pavel Gubarev, the self-styled “people’s mayor” whom Russian media are calling Ukraine’s “political prisoner No. 1.

None of this stops their supporters, or others, from holding pro-Russian protests under banners like “No to fascism” and repeating the claims that they are fighting the “fascists” and “anti-Semites” who have taken over in Kyiv.

The Russian channels have been caught any number of times doctoring their material and making demonstrably false claims.  Long-term researchers of xenophobia and anti-Semitism in Ukraine have established a National Minority Rights Monitoring Group whose first reports demonstrate clearly that in comparison with Russia, Ukraine’s problems with anti-Semitism and xenophobia are minor.

When forced to acknowledge objections from Jewish organizations about the Kremlin’s line on Maidan and anti-Semitism, Russian TV viewers heard the suggestion that such organizations were “bringing on a second Holocaust”.  As they had the first, the presenter added.

The bulk of Russian military and tanks may still be on the other side of the border, but nobody should be in any doubt that a fully-fledged offensive is underway, with Russian TV channels playing a major role.