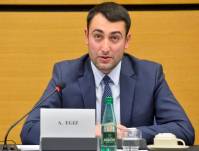 Abduraman Egiz, a member of the Mejlis of the Crimean Tatar People, was assaulted in the centre of Simferopol by men in camouflage.  Some young men who came to his defence also received blows.

He had just parked his car, he explains, when seven men came up to him claiming to be members of the “self-defence” vigilantes and demanding that he show his documents. He refused, suggesting that they call the police whom he would show his passport to.

Egiz says that these “vigilantes” who were later joined by around 20 men in military uniform kept insisting that he show his documents and also that he open his car for them to inspect. He refused.  They put handcuffs on him and tried to take him to some “headquarters”.  He showed resistance and was hit several times, as were several young Crimean Tatar men who tried to defend him.

Egiz finally pulled out his passport, and seeing his registration, the vigilantes let him go.  He says that there is no possibility of any dialogue with such people.  He hesitated when asked if he would report the incident to the police and said that he would discuss this with the head of the Mejlis, Refat Chubarov.

From the report at 15minutes