In Memory: Yelena BonnerYelena Bonner speaks out in defence of Peter VinsTo Yelena Bonner on her 85th birthdayYelena Bonner: The authorities are trying to destroy the Sakharov PrizeIs the remand in custody of the “Ivanovo Uzbeks” to become indefinite?
• Topics / We remember 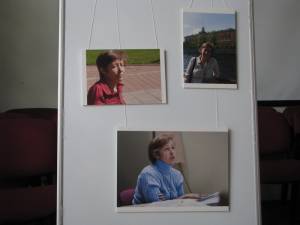 We mourn with all her friends and colleagues the passing of Lena Ryabinina who was for well over 10 years a vital advocate for political refugees from Central Asia.  Her death is a terrible loss to those refugees, many persecuted in Uzbekistan or other central Asian republics, whom she helped.  It is also a personal loss for all those who worked with her.

Svetlana Gannushkina, Lena’s colleague over more than 10 years, writes that although not a lawyer by training, Lena became one of the most authoritative specialists in Russian on defending refugees from extradition.  It was thanks to her that attempts to extradite or simply hand over to the authorities in Uzbekistan and other central Asian countries where they faced torture failed.

Lena would doubtless have mentioned the failures which demonstrated the cynical collaboration between the security services of the Russian Federation and Uzbekistan (and under Viktor Yanukovych, the SBU).

One such failure we shared, working through the night to try to prevent a refugee, married to a Russian national, from being handed over to the Uzbek security service despite a decision from the European Court of Human Rights.   There was no time for indulging in gloom – too many other people needed her help.

In Memory of Elena Ryabinina [1]

Elena Ryabinina, a leading Russian human rights defender, died in Moscow on May 4, 2014, at the age of 59. Her battle with cancer was the only one she had ever resigned to losing, but she remained courageous, selfless, and feisty to the very end.

Ryabinina had a boundless drive to right wrongs and do battle on behalf of migrants and asylum-seekers with government officials at all levels, from patrol officers to those at the very top. A fierce fighter for human rights, she was outgoing, optimistic, and extremely witty. She was also very effective, with victories in the Russian court system and the European Court of Human Rights on behalf of migrants and asylum seekers at risk. Ryabinina was always there for the victims. There is hardly any refugee from Central Asia who did not know her name and phone number. She was on call for them 24/7, ready to rush to a police station at 3 a.m. to rescue someone threatened with deportation.

Born in Odessa, Ukraine, on February 14, 1955, Ryabinina was trained as a scientist but by 2002 was devoting all her time and energy to helping asylum seekers in Russia. She worked with the Civic Assistance Committee and the Memorial Human Rights Center, two prominent Russian rights groups. Beginning in 2007, she directed a program that provided assistance to victims of political and religious persecution in Central Asia at the Moscow-based Human Rights Institute.

For the past 12 years, it has been a privilege for Human Rights Watch to work with Elena Ryabinina. We mourn her passing andextend our heartfelt condolences to her family, friends, and colleagues. Her amazing life, commitment, and courage will forever be an inspiration.

Ryabinina was buried on May 6 at Khovanskoe Cemetery near Moscow.