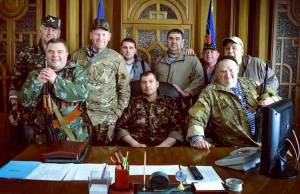 The self-styled "people’s governor", Vitaly Bolotov and other illustrious representatives of the "Luhansk People’s Republic"

The head of School No. 13 in Bokovo-Platovo [Luhansk oblast], Olha Timofeevna says that she has received threats after refusing to hold the so-called “referendum” in the school premises.

On May 6, she recounts, there was a meeting of all school heads at the Antratsyt City Executive Committee building over which a Russian flag is flying. At the meeting, the school heads were ordered to hold the pseudo referendum in their school buildings.

“I said that the referendum is illegal and that there is no relevant decision on it. Therefore in my school I won’t allow it to be held. And that’s how it all began.”

A little later she got a call from the same city executive telling her that the relevant decision had been taken.  She responded that it was illegal and she would not follow it.   First there was an attempt to override her by making a call to another teacher, then two armed men in camouflage appeared.   They behaved very badly, were insulting and threatening, and said that they’d bring in people who’d deal with her.  They got into a black BMW nad went off.

Since then she has received several telephone calls with threats. A man rang and said: “Don’t forget you have a family, a home… you could lose it all in one minute”.  Then a woman rang, claiming to be the head of a city election commission, telling her that she should understand what the power of the power means and threatened that they would get her the next day.

Olha Timofeevna is convinced that there are other school heads who are against the referendum, but are afraid of reprisals if they refuse.

As reported, the May 11 pseudo referendum will contain one question: “Do you support the Act proclaiming the state independence of the Luhansk People’s Republic?”

On Wednesday Russian president Vladimir Putin unexpectedly called on the Kremlin-backed militants to postpone the referendum.  It remains to be seen whether this is designed to show that the militants do not obey Kremlin orders, or to genuine stop the pseudo referendum.