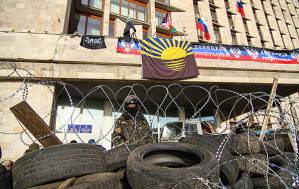 The Russian foreign ministry’s "White Book" on human rights abuses in Ukraine ignores Nov 30, titushki, etc, and effectively suggests that "the opposition" was behind the gunning down by police snipers of unarmed protesters

In its propaganda against the authorities in Kiev, the Kremlin has decided to employ a curious narrative on "human rights". The Russian foreign ministry recently released a "White Book" detailing "human rights violations" in Ukraine from November 2013 to March 2014.

I guess in the media war against Ukraine anything is possible, even the absurd. The human rights abuser has decided to preach to the abused about human rights it tramples on regularly.

See also: On Moscow’s burning wish to defend rights in Ukraine, not in Russia