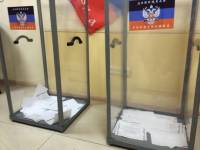 While western leaders make noises similar to those over the Crimean referendum two months ago, Russian media are presenting the May 11 pseudo-referendum as fair and legitimate, the Kyiv government as murderous and the west as collaborating with fascists.

It was all for the cameras on Sunday.  EU countries got a chance to condemn a farcical pseudo-referendum in which people could ‘vote’ for others, and not living in the region was no impediment.  They could even sound firm while doing nothing more than threatening more sanctions if the May 25 elections cannot be held.

And Russians, as well as the many Ukrainian viewers of Russian TV channels, learned that “according to the CEC 89.7% of the voters voted for the independence of the Donetsk region”, and that the turnout was over 74%.  They were also told, and apparently shown footage, ‘proving’ that Ukrainian National Guard men shot at civilians in Krasnoarmeisk, killing at least one man.  It is by no means clear who carried out the shooting, but that, of course, is not mentioned.

‘The west’s’ reputation among the Russian media’s audience is, in short, mud.

Not so Russian President Vladimir Putin’s image.  He, after all ;called on’  the pro-Russian militants to postpone their referendum and was ignored.  That’s a double win for him.   He can use it as ‘proof; that the militants aren’t under his control, and that the referendum had nought to do with him.

Meanwhile all Russian TV channels loyal to and/or funded by the Kremlin were unanimous in finding the event legitimate and decisive.

All of those media spoke of the Central Election Commission in headlines and only occasionally mentioned that the body in question was that of the ‘Donetsk People’s Republic’  Since the so-called referendum was on whether there should be such an independent ‘republic’, it can hardly be administered and overseen by the latter’s election commission.

This is no quibble over terminology.  Ukraine’s Central Election Commission condemned the event on May 11 as illegal and unconstitutional.  This was reiterated by all major election watchdogs.  The Luhansk Regional Committee of Voters of Ukraine [CVU] was, in fact, present, however its figures for the turnout in Alchevsk, the one city where it found that the voting had been sufficiently transparent to enable any estimate was 50-60%.  CVU “observers” tried to vote in various places.  In Rubezhnoye the lack of a passport was no problem at all, with a fictitious address and passport number being added to the supplementary list.  Nor did being from Lviv prevent a person from voting. In Kremennaya the observer asked for an extra ‘ballot paper’ for her sister.  It was issued, again with the address and passport number simply invented.

None of this, of course, is seen on Russian TV where the process looks impeccable.  After quoting the head of ;the CEC’,  LifeNews is told by Mikhail Polyakov,  described as the federal coordinator of the observer corps ‘For fair elections’, that “the high turnout demonstrates the huge interest to the given referendum and the lack of coercion”.

Almost as free, by that definition from a Russian NGO as elections in Soviet times where the vote tended to be even closer to 100%.

The voting, by the way, according to the report, “took place against a background of the enforcement bodies’ operation by the Kyiv authorities during which tanks and artillery are being used, and peaceful civilians are dying”.

Presumably the turnout would have been even higher if the Kyiv authorities were not using heavy artillery against civilians.

The chief players, as well as the Russian media, took care over every aspect of the performance.  Nothing was said to imply more than ‘support’ for Russia.  Even Viacheslav Ponomarev, the self-styled ‘people’s mayor’ of Slovyansk looked almost respectable, though he remains too candidly thuggish to be safely allowed near a microphone.  This time, after stating that their next step would be the creation of a ‘Donetsk People’s Republic’  which could join Russia’s Customs Union if it “gains independence”. Ponomarev got carried away.

“Russia is our brother, with Russia we have full interaction, including entry into the Customs Union”, Ponomarev said.  He added that no decision on asking for the Donetsk region to become part of Russia has been taken.

“If this is needed, then we can hold any elections, any referendum within three days”, the Slovyansk ;people’s mayor’ said.

Given the reluctance shown by western countries to take real and painful measures, that may not prove an exaggeration.