In Kotovsk [Odessa oblast] on Sunday night assailants forced their way into the home of journalist and blogger Oleksandr Yaroshenko [who writes under the pseudonym Serhiy Levitanenko].  They beat him up very badly, and started a fire in his flat.

A colleague, Dmitry Ursatyev, told 048.ua that the assailants, masked and in camouflage gear, beat and tried to suffocate Yaroshenko, shouting that he didn’t like Putin.  He managed to break free and jump out of a window.

When he returned to the flat, he flat that it had been set alight, with the room in which he worked, his computer, mobile phones, video recorder and all documents destroyed.  A police investigation is under way.

Telekritika reported earlier that the journalist had been attacked and beaten on April 4 at a meeting of the local branch of the Party of the Regions. After reporting the attack to the police, he began facing harassment.

Yaroshenko [Serhiy Levitanenko] was also attacked by titushki or hired thugs on Feb 20 when he was filming police officers leaving for Odessa.  He reported the attack to the police on Feb 26. 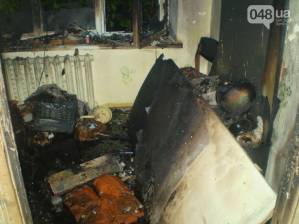