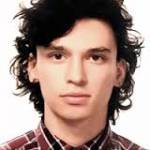 Students from Warsaw University have collected around a thousand dollars for the mother of Roman Huryk, the 19-year-old student from Ivano-Frankivsk gunned down by police snipers in Kyiv.

Roman was a philosophy student at the Vasyl Stefanyk Precarpathian National University and his mother’s only child.  He had taken an active role in the EuroMaidan protests and his last post on the social network VKontakte was dated Feb 18: “Now or never. All onto Hrushevsky St. To the death”.

Roman was killed on 18 February by a sniper’s bullet.  The surgeon called him a young man whose eyes burned with the longing to live.  He had been shot in the head and his wound and blood loss were too serious to save him.

A Polish delegation to the university brought Roman the money collected by students from the international programme of Warsaw University.