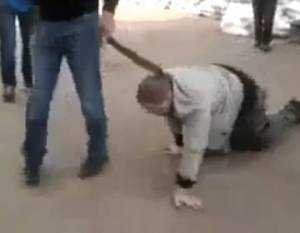 Mykhailo Logvinenko, a young civic activist from Luhansk, was abducted on Saturday evening, May 10.  He was seized by the militants while pasting up posters against the pseudo-referendum on May 11.

The young man was chained, publicly beaten and degraded, with the whole shameful procedure being filmed.  Luhansk journalist Vsevolod Filimonenko, who first reported the abduction, believes that Logvinenko is being held in the SBU building.   His parents are understandably extremely concerned and desperate for help in obtaining their son’s release.