Filmmakers have come out in defence of Oleg Sentsov, Ukrainian film producer and EuroMaidan activist who, as reported, was arrested in Simferopol on May 11 and is understood to be accused by Russia’s FSB of ’planning a terrorist act’. 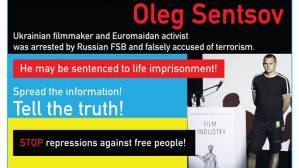 The following is slightly adapted from their report.

The head of one of Germany’s leading regional film funds is calling for the release of a Ukrainian director seized from his home last week by Russian secret service officials.  Kirsten Niehuus, head of Medienboar Berlin Brandenburg, says director Oleg Sentsov was arrested at his home in Simferopol, Crimea and accused of organizing a terrorist attack.  Niehuus, whose fund is among the European backers of Sentsov’s new feature Rhino,  says Sentsov’s only "crime" is his opposition to the annexation of Crimea by Russia.

An ethnic Russian, Sentsov had been involved in supporting the Euro Maidan protests in Kiev during the winter.  More recently he was involved in helping Ukrainian military officers who do not support Russia’s annexation of Crimea leave the territory.

Members of the Ukrainian Filmmakers Union, which has protested his detention along with the Ukrainian Ministry of Culture, understand he has been accused of organizing a terrorist attack and had been flown to Moscow to face trial there. He is believed to have been taken to the city’s notorious 19th century Lefortovo prison.

Niehuus said: "It is extremely scary; if there are rules, however stupid, you may make a choice about your actions. But when the rules change day to day that makes it impossible for any thinking person."

She first met the award-winning director at the Odessa International Film Festival, where she was impressed by his debut feature Gaamer. Medienboard agreed to support Rhino after German producer Alexander Ris picked up the project.

Hrovje Hribar, head of the Croatian Audiovisual Center, which is also supporting the film, told The Hollywood Reporter that industry professionals need to raise awareness for Senstov’s plight at the highest levels.

"This is very disturbing news, " he said.

Sentsov, who denies any wrongdoing, is due to be defended in Moscow by Dmitry Denze, a Russian lawyer who worked on Pussy Riot case.

Ukrainian filmmakers say they believe Sentsov’s arrest is part of a campaign of intimidation against those who disagree with Russian’s annexation of Crimea last March. Around two dozen other people have also been detained.

“Sentsov is one many people arrested in Crimea and carted off to Moscow on trumped up charges. I would hope that we can use his position as a public figure to draw attention to this. I urge our brave friends and colleagues in the Russian industry to speak out, " Downey said.

If convicted, Sentsov faces up to 10 years in prison under Russian law, the minimum term for those involved in terrorism.

The filmmaker’s wife and two children, who are still in Crimea, are understood to have been moved by family friends to a safe place.

Russia’s state-run media has been silent on the case, but opposition and independent news outlets have expressed support for the jailed director.

"Crimea seems to have become a testing ground for a crackdown on those with dissident opinions, " online magazine Colta.ru reported. "And what is happening is really a terrorist attack; one of its victims is Oleg Sentsov."