Kramatorsk: Women drive armed militants out from their streetMost Ukrainians view Russian influence as negativeMoscow’s fictitious “civil war in Ukraine”Pro-Russian, anti-Roma, anti-Semitic and hunting out Ukrainian speakersThe Donetsk anti-Semitic leaflets – what should not be overlookedEast Ukraine crisis and the ’fascist’ matrixRussia continues its false narrative as defender of oppressed minorities in UkraineRussian propaganda claims Jewish organizations supporting Maidan are bringing on "second Holocaust"The Crimean referendum’s neo-Nazi observersPutin’s Neo-Nazi HelpersChief Rabbi and others dismiss Putin’s “anti-Semitic extremist” claimsRussian propaganda must be challengedWestern Media: Don’t distort the situation in Ukraine!Russia’s aggression poses dangers beyond Ukraine’s bordersCrimea: Anti-Semitic card and other provocation in time of siegeMr Putin: We ethnic Russians and Russian speakers don’t need protectionDangerously orchestrated Crimean exerciseRussia claims threat to its interests and life of Russian nationals in UkraineBlood and Berkut Sniper Bullets on the President’s HandsMustafa Dzhemiliev on Maidan: I’m proud of you, dear fellow Ukrainians
• Topics / The right to liberty and security

Kramatorsk women who defended their street forced into hiding 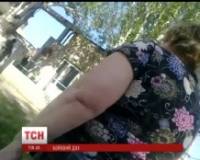 The courageous women from Kramatorsk [Donetsk oblast] who forced armed pro-Russian militants to leave their street have been forced to seek shelter after receiving serious threats.

As reported,  the women can be seen on a video widely posted on the Internet telling these armed men to get the hell out of their street and to stop trying to use women and children as human shields.  One woman is heard repeating that she has two children and wants the militants out.

The video was, unfortunately, watched not only by those who applauded the women’s courage.  TSN reports that the family of Sofia Uspishna and her daughter seen on the video have been forced into hiding.

Sofia Uspishna began receiving phone calls threatening to kill them.  She says that people have responded and offered them refuge, and that Ukrainian soldiers have also got in touch and promised to help.  They do not for the moment plan to return home.

It is, unfortunately, not surprising that no mention is made of the police who have not been active in supporting citizens against militants’ aggression.  In the Luhansk region, some attacks by armed militants on election commissions have taken place either with obvious coordination with local police, or active participation by police called in to guard the premises.

Sofia Uspishna was heard on the video calling a police help line, giving the registration number of the min-van.  There is no evidence at all that this was taken up.  It remains to be seen whether the apparent change in position and public condemnation of the militants by Donetsk billionaire Rinat Akhmetov make a difference.  His influence in the area is undisputed with the question having been only how he uses it.