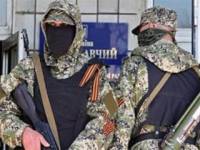 In the Donetsk region on Sunday only 7 out of the 22 election districts took part in the presidential elections. The very few polling stations which even opened following days of systematic attacks, seizures and threats from Kremlin-backed militants are being forced to close

Observers from the joint OPORA and Committee of Voters of Ukraine [CVU] mission report that gunmen from the so-called Donetsk People’s Republic have been blocking the work of precinct election commissions on Election Day.

The terrorists sealed the safes containing all documentation, and demanded  that the polling stations be closed.  OPORA notes that two of the above-mentioned polling stations were fully ready for voting which has now been stopped.

PEC No. 140061 in Kalinino [Artemivsk district] was also seized by DPR gunmen who threatened the OPORA and CVU observers.  The election commission decided to close the polling station.  The district election commission did add that they were also unable to work as ballot papers had not been delivered.

Over the last couple of days pro-Russian gunmen have burst into most election commission premises in the Donetsk and Luhansk region, stealing the equipment and documents, abducting heads of commissions and issuing clear threats to the members.  This has resulted in a very small number even opening.

On Saturday, the pro-Russian militants also declared that they would regard people who took part in the elections as ‘enemies of the state’ against whom ‘sanctions’ would be applied.

62.ua reports that in Donetsk it took armed men in masks 10 minutes to ‘close’ the one polling station that had opened [on Chelyuskintsev St].

10 minutes after it open 17 armed men in a car and mini-van with numbers blotted out appeared and drove the commission members away. There were two police officers present, one a young woman.

The same site reports that no polling stations in schools have opened.

It is worth noting that the impression given by the Russian media differs markedly. RIA Novosti claims that 20% of polling stations in the Donetsk region are working, citing the press service of the regional administration.  There is no mention of the terrorist tactics of the pro-Russian militants which explain the low number.

Instead there is a photo of a truckload of militants armed but looking peaceable enough and surrounded by people supporting them.   There was indeed a rally against the elections on Lenin Square, from where OstoV reports the participants set off to destroy the residence of Rinat Akhmetov, Ukraine’s richest man who last week broke his silence and came out against the militants.

RIA Novosti also reports that “the people’s militia have taken the hotel in Donetsk where journalists are living under their control”.   The same news is reported differently by other sources who state that pro-Russian gunmen have seized the Victoria Hotel.  This is owned by Donetsk Governor, Serhiy Taruta, and Kyiv Post reports that the militants left after not find Taruta there.