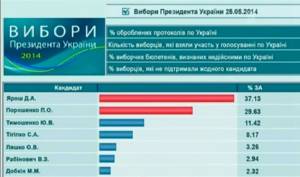 Ukraine’s presidential elections brought good news for the country, both in the outright win for one candidate and in the negligible support given to far-right candidates. Both were a blow to the Kremlin.  So devastating that Russia’s First TV channel obligingly sought to soften it. Or just claim deceit.

The votes have yet to be counted, yet two authoritative exit polls give Petro Poroshenko a decisive win, without the need for a second round.  They also give Moscow’s bogeyman No. 1 – Dmytro Yarosh, leader of the far right nationalist party Right Sector only 0, 9% of the vote.   The leader of the far right VO Svoboda Party, Oleh Tyahnybok, with 1.3% of the vote also leaves the Kremlin’s claims about a right-wing fascist junta in Kyiv short on credibility.

During the “Sunday Time” news programme on First Channel, the presenter, Irada Zeinalova pointed to a screen showing what she calls “a strange picture”.  She claims that this screen “appeared on the Central Election Commission central server several minutes ago”.  According to this screen Dmytro Yarosh is clearly in the lead with 37.13% of the votes, with Poroshenko far behind, with 29.63%.

“What this means is for the moment unclear since it radically diverges from the results of exit polls by four public opinion monitors”, she adds.  She then gives information from exit polls which correctly gives Poroshenko a 55% win, Yulia Tymoshenko – 12.9%, and Yarosh – 0.9%.

The CEC had no screen for such election results, and, of course, could not have had until the vote count was completed.

If this is not a clever fake to discredit a Kremlin-subservient TV channel (it does), its aim was, presumably, to suggest a discrepancy between the CEC records and the exit polls.  The most likely explanation for this would be that the CEC was hoping to slip in a far right candidate regardless of who the voters chose. The story is unclear, however the viewer is undoubtedly left feeling that the authorities in Kyiv are not to be trusted, and their election results cannot be believed.

Ukrinform gives another suggestion, citing a source in the SBU [Security Service] who wants to remain anonymous.  The claim is that the SBU had discovered a an illicit programme aimed at inserting a virus which would have produced the 37% win for Yarosh.  The virus was supposedly neutralized 40 minutes before the First Channel news broadcast, but the channel had not yet learned of this.

If there remains some confusion over the reasons for the above-mentioned lies, other tactics are, unfortunately, standard and predictable.  The evening news broadcast an hour before polling stations were due to close suggests a low turnout (untrue); a huge number of irregularities (exaggerated) and that the lack of Russian and CIS observers was because they were not invited, although the head of the OSCE mission said that it was Russia who showed no interest.  The worst dishonesty, however, comes in the report on the situation in the East with the reporter claiming that the turnout of ‘scarcely 9%’ in the Donetsk oblast was linked with overwhelming disgruntlement.

In both the Donetsk and Luhansk oblasts, a large number of polling stations were closed in advance because of constant attacks by armed Kremlin-backed militants who seized documentation, computer technology, sometimes personal items, abducted the heads of election commissions and threatened reprisals if the elections went ahead.  The same attempts to terrorize commission members and the public were seen on Election Day in some of the few Donetsk regional polling stations which opened.

The news broadcast clearly suggests that the elections will be deemed to have taken place despite low turnout in the East because ‘the Kyiv authorities covered themselves” and changed the law.

None of these lies are new.  There also seems little likelihood of them changing. Russian President Vladimir Putin made a show over the last week, promising to “respect” the results of the elections, etc.  This was music to the ears of German Chancellor Angela Merkel who continues to talk about  “extending a hand to Russia” and whose country has most obstructed the imposition of real sanctions.  She not only extended a hand, but also gave Putin a wonderful PR opportunity to join Germany and France in expressing “anxiety at the fact that the situation in that country is still marked by a bitter confrontation and is far from stable”.   This was while armed militants who have already asked to join Russia and for Russian troops to be sent were engaged fulltime in terrorizing election commission members and ensuring that the elections would not be held in their regions.  And while Russian media treated these same armed gunman as representatives of ‘people’s governments’, and assiduously avoided mentioning any negative information about them.

Sunday’s resounding victory for one – non-fascist! - candidate suggests that Ukrainians fully appreciated the danger and likely loss of life before a second round could take place.  That danger was exacerbated by the EU’s continuing failure to act, nor has it abated.