The Kremlin’s Propaganda Coup in Donetsk 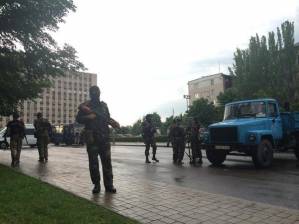 Russian President Vladimir Putin must be feeling very pleased with himself.  The EU has all but retreated behind calls for ‘frank and open dialogue’ while US expressions of concern about Chechen and other foreign fighters entering Ukraine from Russia for the moment remain just that, and no more.  In the meantime, the authoritative Levada Centre has reported that Putin’s confidence rating among Russians in April stood at 82%, 18% higher than in January 2014, and on May 29 the ‘Vostok’ [East] battalion pulled off the perfect propaganda coup in the centre of Donetsk.

The interpretations for what happened in Donetsk differ radically, but first the events. At around 2 p.m. on Thursday afternoon men in military gear from the Vostok Battalion which Kyiv Post calls “a well-organized unit of mercenaries comprised mostly of Russian citizens” arrived in Kamaz trucks and armed personnel carriers. They proceeded to ‘arrest’ several dozen Donetsk People’s Republic militants and told the others to vacate the building. This was all presented as designed to purge the militants’ ranks of looters and ‘traitors’.  Towards evening they used other equipment to clear the barricades.  This was supposedly because of the fire hazard and risk of a disaster such as that in Odessa on May 2.

According to a Daily Telegraph correspondent’s rather curious terminology, the battalion “includes fighters from mainland Russia as well as Ukrainian-born volunteers” who allegedly acted out of disgust at the looting of a supermarket”.  The author writes that the events on Thursday have “plunged the rebel movement in the east into crisis”.

They may – or may not – have dealt a blow to the militants’ confidence that they could loot and plunder with impunity, but a crisis seems seriously unlikely.  This is not merely because the head of the self-proclaimed republic, Denis Pushilin backed the action.  The very term ‘rebel’ seems a misnomer, with Pushilin, Pavel Gubarev and other leading pro-Russian militants having consistently followed Moscow’s lead.  The Vostok battalion may possibly have some Ukrainian volunteers in it, but most are mercenaries and / or professionals from the Russian Federation who get paid for obeying orders.  Quite possibly orders issued by  Alexander Borodai, the Donetsk People’s Republic’s ‘prime minister’ – a Russian PR manager.

The public relations element was certainly well-planned, as was the timing of the operation which coincided nicely with the difficulties the Kyiv authorities are now experiencing in clearing Maidan Nezalezhnosti.  Russian television presented it in glowing terms with the main propaganda coup being in the apparent establishment of order and cleansing of ranks through the removal of criminal elements.   If Valentin Krasnopyorov is correct in his assessment that “Putin is taking Donetsk under his control”, then the ploy could not have been better devised.  The militants’ lawlessness in many east-Ukrainian cities have been a powerful antidote to the zombifying propaganda pouring forth from Russian television channels which have in many cities taken over all or most frequencies which previously broadcast Ukrainian channels. News that Russia would be willing to provide ‘humanitarian aid’ to the Donetsk People’s Republic could seem like yet another step to provide respite for the region’s beleaguered population.

Ukrainska Pravda journalist Ekaterina Sergatskova shows how careful the presentation was.  “Those armed guys from the Vostok battalion come up to young women, give them roses and behave extremely nicely (they gave me one, for example.).  I’ve seen such polite green people somewhere else.”

That ‘somewhere else’ was, of course, the Crimea before the blitzkrieg ‘referendum’ on March 16 and annexation by Russia two days later.

Sergatskova suggests only that Moscow will now control the ‘Donetsk People’s Republic’ militants better.  Krasnopyorov sees the DPR as largely having served their purpose.  Russia, he says, has now consolidated its resources and can dispense with them.  He suggests that the situation has entered a new phase, similar to that of the Crimea, although with its own specific features. The Vostok Battalion answers to Moscow alone.  Under their control, people close to Moscow, or to ‘the Family’ [i.e. former President Viktor Yanukovych], can re-emerge.

Krasnopyorov believes that this new phase needed to be achieved now before Petro Poroshenko’s inauguration as president in order to give Putin negotiating power.  His demands would be recognition of the Crimea in order to reduce international pressure; a broad coalition in order to retain control over Ukrainian political life; resolution of gas issues and a controlled political elite in Donbas.

Krasnopyorov does not believe the situation to be lost, but does stress the need for consolidated effort, and for western support.

If the west continues to watch as well-armed and trained fighters are brought in from the Russian Federation to fight an undeclared war against Ukraine, then what happens next will be largely decided in the Kremlin.  As will be any limits to Moscow’s territorial appetite.